Planned Parenthood’s nefarious practices caught on camera aren’t enough to convince the Republican majority in the Senate to cease funding the organization with U.S. tax dollars.

In a procedural vote yesterday, the Senate split 53-46 continuing taxpayer funding of Planned Parenthood despite outrage throughout the country over controversial videos detailing the harvesting of human fetal body parts of aborted babies, for profit.

Had it not failed, the vote on the legislation in the Senate would have barred federal funds from flowing into the organization.

White House Press Secretary Josh Earnst claimed he had not yet viewed the disturbing videos. He said he hasn’t been briefed on the ways of work at Planned Parenthood but contended they have assured him their standards are on high ethical ground.

Appearing on CNN’s “New Day” on Monday, Earnst added, “what the President has said is that Planned Parenthood provides valuable services, health care services for men and women across the country. He would veto any legislation that tried to advance wholesale defunding for Planned Parenthood” – CNN.

How can it be that Mr. Earnst hasn’t seen the evidence when it has been replayed repeatedly over every medium known to man?

Has he been out of the country?

Conservatives will have another chance to thwart the federal funding of this heinous organization in the fall.

CNN Reports: Conservatives in both the House and Senate are demanding that their leaders attach a provision to any spending bill to block additional federal funds from going to Planned Parenthood.

Texas Republican Sen. Ted Cruz told reporters the GOP should use “any and every procedural tool available” to defund Planned Parenthood. When pressed if that meant forcing a government shutdown over the issue, Cruz argued Democrats should be the ones asked if they supported “continued taxpayer funding for an organization that has been caught on film, apparently repeatedly admitting multiple felonies — to buying and selling body parts.”

Federal agencies run out of money at the end of September, and Congress is expected to take up some type of short-term spending bill next month.

Meanwhile, public outcry to defund Planned Parenthood is loud and clear. What isn’t understood is how or why the Republican majority in Congress couldn’t pull off the will of the people yet again.

Unsurprisingly, the Left continues to defend what is outrageous and unconscionable.

Cecile Richard, president of Planned Parenthood Federation of America, called the failed GOP effort on the bill on Monday evidence that the issue was a “political non-starter,” and “While some extreme Republicans may continue to insist on shutting down the government in order to deny health care, including birth control, to millions of women, that is a fight the American people have zero appetite for and a fight these extremists will not win,” Richards said in a statement, according to CNN.

Ms. Richards is the supreme extremist on the Left. Her services are not health care for women. They are death sentences for babies. As if it isn’t bad enough to kill them, her agencies go to great lengths dismembering them for profit. Crushing them without batting an eye. That’s extreme.

Have you ever noticed there isn’t a single commercial of women sharing that they made the correct “choice” by aborting their unborn children?  Not one. 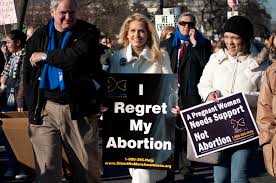 The professional politicians pushing for defunding took a less than assertive stance after the failed vote. They sat on the fence, they did.

GOP Sen. Rand Paul, who pressed Senate leaders for the vote on Planned Parenthood this week, was reluctant to draw a line in the sand.

“I support any legislation that will defund Planned Parenthood. But (I) don’t think you start out with your objective to shut down government,” the Kentucky senator told CNN’s Jake Tapper on Sunday.

Iowa Sen. Joni Ernst, the sponsor of the GOP bill that failed to advance on Monday night told reporters, “These videos are not going away.”

But when asked if she would vote for a government funding bill that was linked to defunding Planned Parenthood, she said she wasn’t at that point yet, and wasn’t “going to discuss that.”

Senate Majority Leader Mitch McConnell, also a Kentucky Republican, declined to rule out attaching a provision to the spending bill in September.

“We’re going to discuss how to fund the government after the recess,” he told reporters last week.

Boehner has emphasized that multiple congressional committees are launching investigations into the videos and said he is awaiting more facts before deciding any next steps.

Well, there you have it. More of the same wasting of time and money by elected officials off to recess, without garnering desired results on behalf of the people who put them there.

Unfortunately, there will be no recess of aborting children or tearing them limb from limb at Planned Parenthood.

An estimated 125,000 children in the U.S. will continue to be aborted daily. Those crushed and sold away piece by piece don’t have the luxury of time.

Planned Parenthood is seeing to that.