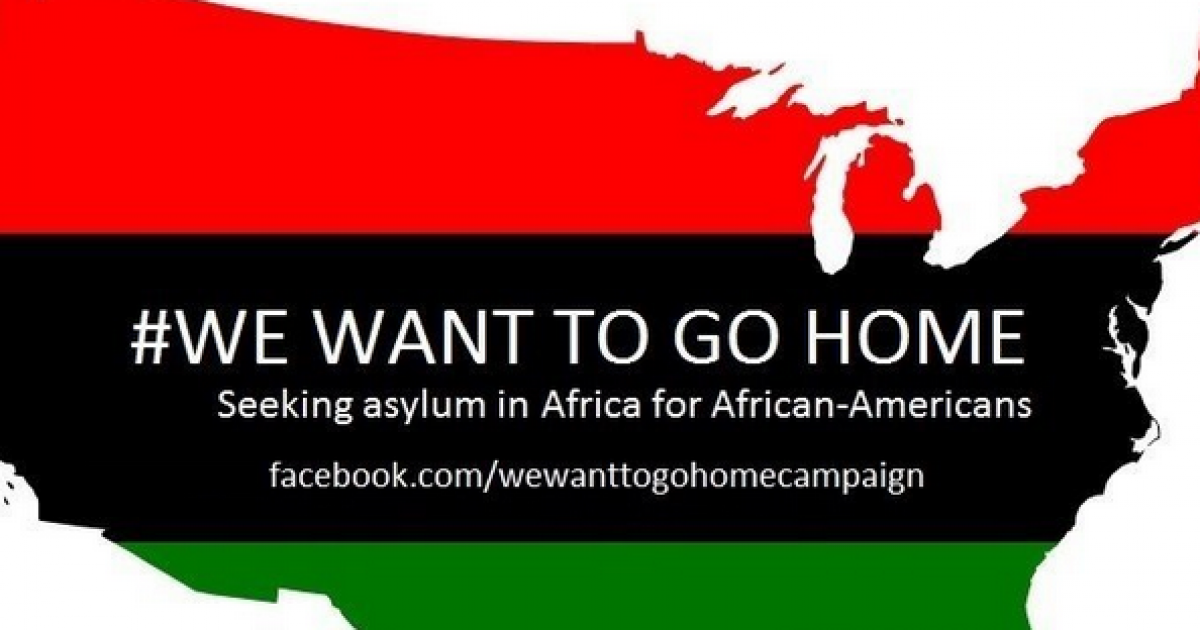 An online petition started by a group that calls itself the #WeWantToGoHome campaign is collecting signatures to ask the governments of African countries to grant asylum to African-Americans seeking to escape the horrors of life in America and return to their ancestral homeland.

The petition is addressed “Dear African Governments,” and begins:

“African Americans – the descendants of Africans stolen from the continent more than 400 years ago – are experiencing what can only be called neoslavery on the land that our ancestors were forced to build.”

The idea of American blacks migrating to Africa isn’t new, nor is it far-fetched. Many American Jews have taken part in the diaspora to return to their ancestral home in Israel, bringing their education, skills, talents, and wealth to help build the fledgling nation into a shining example of what a democracy in the Middle East can be. It is not unthinkable that the same process could be helpful to many countries in Africa, and black Americans who might emigrate to those countries could potentially experience the same sense of belonging that American Jews have found in Israel.

Ghana, for example, has opened the door to the migration of black Americans and quite a few have undertaken the move and seem to be happy with the decision. However, there is a potential problem. The people who are needed in African countries are not the kind of people who are part of the #BlackLivesMatter movement or the #WeWantToGoHome campaign.

Hard-working, well-educated, law-abiding blacks are assets to America, and astute enough to know they want no part of Africa. In fact, even blacks who don’t possess these great qualities want no part of Africa, a country where in many regions the homes don’t have floors or running water. It wouldn’t take long for expatriates to experience the lack of basic medical care, the scarcity of food, and no wi-fi!

One of the great things about living in a free country is that people are free to leave. As people from poor countries are risking their lives to get into America, I’m sure one of them would be happy to hold the door open for anyone trying to leave. Just be sure to not let the door hit you on the way out.

Before the #BlackLivesMatter crowd decides to go, perhaps it would be worth finding out exactly how the country of their choosing compares to the United States; for example, what happens in that country to pimps or drug dealers? What do they do if you attack a cop and try to take his gun? What rights would you have in their criminal justice system, and how do their prisons compare to those in the United States?

These are important questions to consider because people who have no respect for the rule of law here in America are not likely to suddenly develop one when their feet touch African soil. There is, perhaps, an even more important question they should consider – what happens when you find yourself in the majority where you can no longer claim to be a victim and the excuses you’ve used to justify your lack of success are not accepted?