File this under: War on Men!

Kimberly Jackson (not kin to me…obviously) was caught having sex with an unconscious man in a car, in broad daylight.

The man was identified as Earl Palmer, and he had apparently passed out from drinking.

Passersby called the police to report the sex act, and police arrived East Virginia Beach Blvd to find the unconscious Palmer being “serviced” by the intoxicated Jackson.

Jackson was arrested for public intoxication. Other charges could be filed, however the 36 year-old Jackson was later released on Bond. 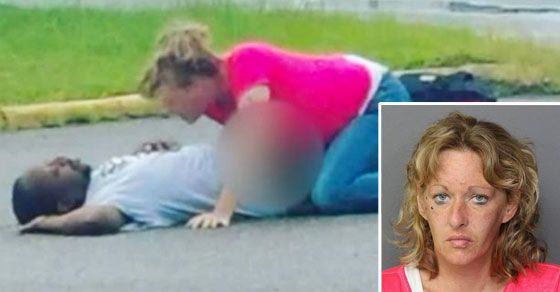 Jackson reported said the reason she had sex in public with Palmer, who as it turns out is her significant other, was because,

“I was in the mood, that’s basically what happened.”

As for Palmer, he said he has just passed out from drinking, nevertheless the sex was consensual.

Talk about a BLOW to the women’s movement! And here I thought “drunk sex” was rape?!

Palmer went on to say,

“I’m here (in court) trying to clear her name, and let them know that I consented to that, I just didn’t finish the job as you could say.”

Jackson’s excuse, besides the booze is she spontaneous.