I am fond of saying that many times Republicans try to do the right thing, but do it the wrong way.

Branch Rickey, former president and general manager of the Brooklyn Dodgers, scoured the Negro Leagues in 1943 to find the best and brightest baseball players whom he could sign to integrate baseball.  He wasn’t just looking for raw talent; he was also looking for the “right” person(s).

Jackie Robinson was not the only good ball player in the league back then; for sure he was definitely one of the elite.  But he also had the other skillsets that would allow him to endure the racist taunts he was about to encounter as the first Black to play professional baseball with white folks.

Rickey chose Robinson not only because of his skill, but also because of his personality, which would allow him to keep his composure under the strain of hostility he was about to face.  Rickey constantly validated Robinson, specifically and constantly discussed publically the need for diversity within baseball and ultimately America.

Where are the Branch Rickeys of the Republican Party today?  There are none.  The last one was former N.F.L. quarterback and former congressman Jack Kemp who died in 2009.

I was plucked out of obscurity by the Bush family in St. Louis when I was fresh out of college from Oral Roberts University.  They had no prior relationship with me, but they, like Rickey, scoured Missouri politics to find the best person(s) with the right political background. The candidates also had to have the right temperament to proudly represent the Bush family’s name, as the then vice president was about to launch his presidential campaign in 1988.  According to them, “they had been following my career and noticing my work in the Republican Party in Missouri.”

My work got me noticed, but my relationships got me opportunity.  I didn’t have to run to be a delegate to our party’s national convention. I was told I would be a delegate and thus it was so.

My point is very simple. I grew up in a Republican Party when relationships mattered and the party took care of their own.  This is no longer the case.

Why would Rand Paul have lunch with Al Sharpton last November in the Senate dining room?  By doing it in the Senate dining room, he meant for the media and other members of the U.S. Senate to see them together. This action validated Sharpton as someone to be sought out for private counsel.  I wonder why there is no account of Paul making a similar validation of a Black Republican with relevant party credentials. 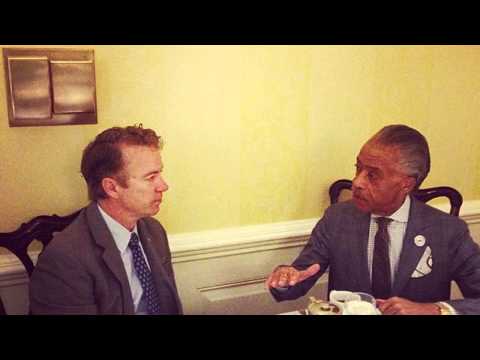 Why would Jeb Bush meet with members of the Black Lives Matter group when he has never met with any relevant Black Republicans?  Are you kidding me?  When you have no Blacks in your inner circle, you tend to make foolish decisions like this.

South Carolina Gov. Nikki Haley is the most recent example of validating Black Democrats and ignoring Black Republicans.  She was in town last week to speak before the National Press Club.  I thought the section of her speech about her accomplishments as governor was very good; but the speech was horrible when she began to talk about race relations and the Black community.  I also found it to be very offensive.

It was quite obvious that the speech was written by a White staffer.  Memo to Republicans: you cannot have a White person write a speech about Blacks and race relations! Period.  End of discussion.  I found the speech like the tinkling cymbal or sounding brass, full of sound and fury, signifying nothing.

The most offensive part of her speech was when she began to gush over her budding friendship with Jesse Jackson.  I have known Jesse since my high school days in St. Louis and will acknowledge that he has done some good things for America.

But again, why would she not use the occasion of her speech to validate some Black Republicans, not only from her state, but from around the country.  I will tell you why: because she doesn’t know any.  She doesn’t know Bob Brown, Harold Doley, Kay James, Shannon Reeves, Sarah Harper, or Buster Soaries.

But yet you hear our leaders showering praise upon known Democrats like Bob Johnson and Cathy Hughes, who are both good people and very accomplished.  Yet, their media empires constantly bash Republicans, especially those from the Black community.

If you can’t acknowledge Black Republicans in a speech, should we be surprised that we are not acknowledged in your staffing decisions or your consultant decisions?

As I often say, “the best way to get attention as a Black in the Republican Party is to be a Black Democrat.”

Raynard Jackson & Associates, LLC is an internationally recognized political consulting, government affairs, and PR firm based in Washington, DC.  Jackson is an internationally recognized radio talk show host and TV commentator.  He has coined the phrase “straticist.”  As a straticist, he has merged strategic planning with public relations.  Visit his website at:  www.raynardjackson.com.