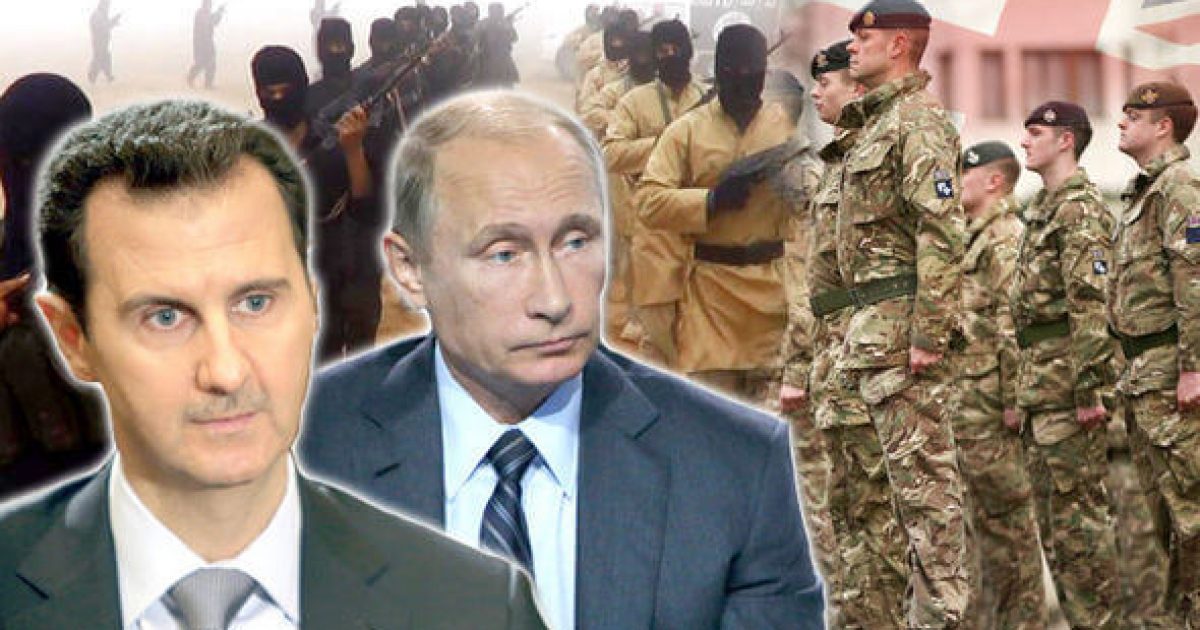 Ever since Russia launched its campaign of airstrikes in Syria, some have speculated that Russia’s primary purpose in the region is not aimed at defeating ISIS. Instead, it has been argued, Russia’s primary objective in Syria is to bolster President Bashar al-Assad. Bloomberg reports:

The Kremlin’s real goal is to help Syrian President Bashar al-Assad retake as much as possible of the territory his forces have lost to opponents, including U.S.-backed rebels, Russian officials told Bloomberg News. Moscow’s deployment of several dozen planes, as well as ships in the Black and Caspian Seas, could last a year or more, one official said.”

Some have also warned that Russia’s involvement could eventually lead to a quagmire, because if the strategy is successful, Russia would essentially be forcing the U.S. and its allies to choose between Assad and the Islamic State. A top Russian military official has explained that the Kremlin sees no moderate opposition in Syria, only terrorists and the pro-Assad forces Russia is backing. “In the West, they talk about ‘moderate opposition,’ but we so far haven’t seen any in Syria,” General Andrey Kartapolov, commander of the Russian operation in Syria, said.

While on the ground, the military operation has expanded with Syrian and Iranian forces using Russian air support to advance against rebel forces, Russia’s airstrikes have mainly been focused on areas outside of Islamic State territory. This could lead to another problem:

“The principal risk for Russia is that Saudi Arabia, Turkey and Qatar, who support armed groups fighting Assad’s forces including radical Islamists, will sharply increase their military supplies in response to the Russian intervention, said the Russian officials.

‘The Russians have not seen the heat of Syria yet,’ said Mustafa Alani, the Dubai-based director of National Security and Terrorism Studies at the Gulf Research Center. ‘The regional powers can give the Russians limited time to see if their intervention can lead to a political settlement — if not, there is going to be a proxy war.’”

Yet another obstacle for Russia is the fact that Syria’s battle-fatigued armed forces are struggling to make significant gains despite intense Russian air support. Overall, Russian airstrikes have been ineffective in terms of real gains on the ground. Russia’s involvement in the war has served to boost the morale of Assad’s regime, but has yet to have much impact on the ground.

Though Syria, along with Hezbollah and Iran’s elite Quds force, has launched ground assaults in Aleppo in the north, Hama and Homs in the center, Latakia along the coast and outside Damascus, these represent minor gains. Plus, Syria still hasn’t been able to regain control over any key sites or supply routes.

Moreover, according to the Carnegie Middle East Center’s Yezid Sayigh, “The air support from Russia by itself is not enough to tip the balance in the favor of the regime, especially since there are so many gaps and weak spots in the Syrian army’s ground forces,” he concluded.  Karim Bitar of the Paris-based Institute for International and Strategic Relations agrees with that assessment, saying that, “changes on the ground are rather minimal.” Bitar continued, indicating that militarily, “the Russians are mostly trying to preserve the status quo and to make sure territories currently controlled by the Syrian regime remain under Assad’s firm hand.”

Chris Kozak of the Washington-based Institute for the Study of War has cautioned that the Russian offensive could possibly backfire because, “heavy casualties may leave pro-regime forces vulnerable to a counter-attack by Syrian rebels.” Indeed, while many believe Russia may be able to play a key role in countering ISIS, some U.S. politicians and experts have expressed apprehension that in trying to bolster Assad, they would also inadvertently aid terrorist groups.

“‘In the absence of Western involvement, groups like ISIS and al Qaeda have filled in the vacuum,’ said Anna Borshchevskaya, an expert on Russian policy in Syria at the Washington Institute for Near East Policy. Borschevskaya added that Russia’s influence in the region works against long-term U.S. interests, as Russian President Vladimir Putin seeks to use the conflict to boost his image on the international stage.”

Potentially complicating matters further, Reuters has reported ISIS has “most probably” used mustard gas against Kurdish forces in Iraq. A team of inspectors from the Organisation for the Prohibition of Chemical Weapons (OPCW) will arrive in Iraq next week to assist in determining whether the agent sulfur mustard was used in the battlefield.

And, though Syrian rebels and Kurds have said they are poised for an offensive against the ISIS capital of Raqqa, they are a ways off from actually doing so, particularly since arms are still in short supply. Hopefully, they were not counting too heavily on the Obama administration’s now defunct program to train and equip FSA rebels. Recently, the administration admitted the $500 million program –which many had argued against from the beginning– had failed miserably.

Meanwhile, ISIS’ massive online recruitment campaign continues. Considered to be the most successful terror recruitment effort, it has been described by FBI Director James Comey as widespread and taking place “24 hours a day.” Comey noted there are, “investigations in all 50 states to try to identify, among hundreds of people who are consuming this poison, where are they on the stages from consuming to acting, and how do we stop them from acting.” Its effectiveness cannot be denied–within the space of one year, ISIS was able to double the number of fighters in its ranks.

The Islamic State has recently experienced a few setbacks to its recruitment, however. For instance, authorities arrested an ISIS hacker in Malaysia, who stands accused of stealing the personal information of U.S. military members. Ardit Ferizi, a Kosovo citizen and one of ISIS’ top hackers, was detained in Malaysia “on a provisional U.S. arrest warrant alleging he provided material support to ISIS and committed computer hacking and identity theft, the U.S. Justice Department said.” Ferizi is also known for having attempted to recruit a member of Ghost Security (GhostSec), an online counterterrorism project. The GhostSec operative had infiltrated ISIS for the purpose of gathering intel, while posing as a potential recruit. Ferizi took the bait and later trolled me on Twitter for writing about it.

ISIS also recently lost twenty-one year old Junaid Hussain, the notorious ISIS hacker from Birmingham, UK who masterminded the terrorist group’s online war. He was killed in a US drone strike. Hussain was also linked to the Garland, Texas, draw Mohammed attack. At that time, Hussain was number three on a Pentagon kill-list.

But, ISIS still has prolific recruiter, Neil Prakash, now known as Abu Khaled al-Cambodi. The 23-year-old former Buddhist from Melbourne had only been a Muslim for a year before ascending to the role of a senior ISIS recruiter in Syria.

ISIS has always been quick to adapt to the constantly shifting landscape of the online jihad. The group has continuously honed its technical skills while also working to lure in top technical talent. Aside from any religious motivation, ISIS recruiters can also earn thousands of dollars for every new recruit they are able to attract. According to International Business Times, “ISIS pays its supporters up to $10,000 for each person they recruit to wage jihad in Iraq and Syria.”

The biggest hindrance ISIS recruitment faces is Operation ISIS (OpISIS), a collaboration between Anonymous hacktivists and GhostSec. They have successfully assisted the authorities in thwarting major terror attacks, clamped down on jihadist activity online and slowed terrorist recruitment. The group has garnered widespread support from the public and from high-ranking individuals and various organizations.

The online front has significant impact on the ground, as heavy recruitment produces a continuous supply of new fighters. You can help with the effort to counter ISIS by reporting threats, suspicious social media accounts and terror-linked websites to this website. GhostSec operatives will pass along any imminent threats to the appropriate authorities, worldwide.