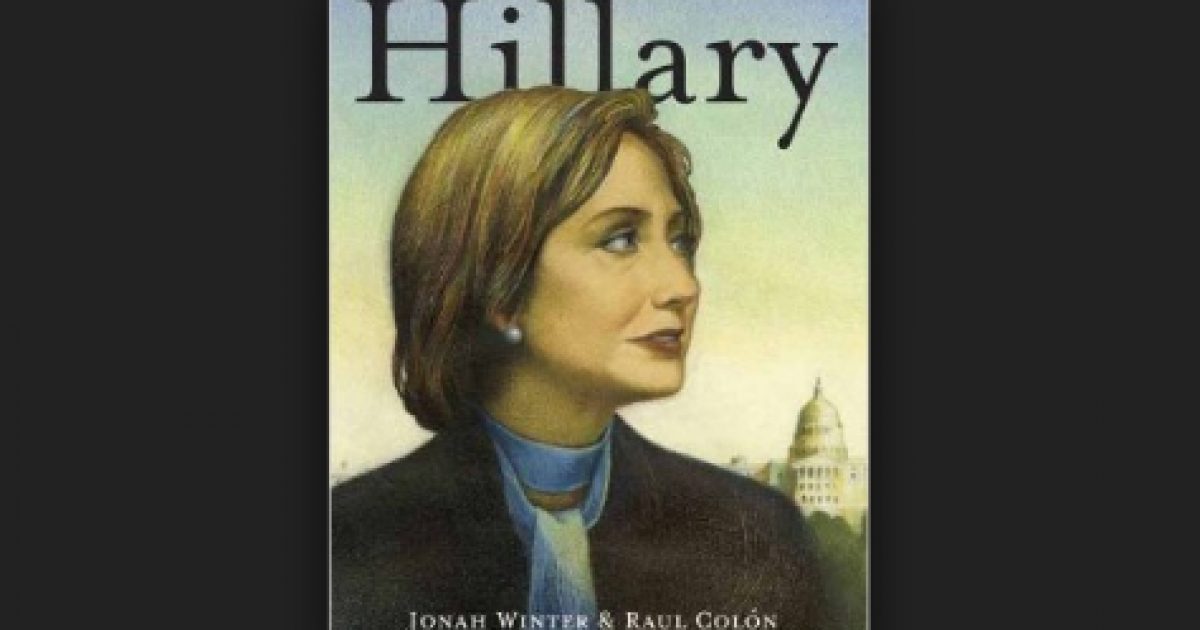 When somebody writes a glowing book about Hillary Clinton, it’s just proof that you can put lipstick on a pig.

Despite how the Left would like to portray the Lady Clinton, she is a ball-busting, take no prisoners shrew, and they ALL know it.

Yet, the Washington Post reports that there are new books about Hillary Clinton, which give a whole new meaning to “literary license.”

In a presidential election year, there will, of course, be political biographies. But political biographies for children? This month three children’s books about one candidate — Hillary Clinton — hit the shelves. Aimed at a variety of age groups, the books deliver a similar message of female strength, though admittedly one likely to go down easier in Democratic-leaning households.

Jonah Winter’s picture book “Hillary” (Schwartz & Wade, ages 4 to 8) begins with a slightly tongue-in-cheek overview of history’s notably strong women: Queen Elizabeth, Joan of Arc (“she was . . . kind of intense”), Rosie the Riveter, “and now there is . . . Hillary.” The first image, rendered delicately in watercolor, colored pencils and lithograph crayon by Raul Colón, shows young Hillary in a baseball cap, surrounded by tall boys, pointing assertively. “She was scrappy,” Winter writes. The tale that unfolds will be familiar to parental readers — Hillary graduating from law school, becoming a mother and first lady. There’s even a summary of her work for health care reform. In simple terms, Winter offers younger readers a portrait of someone who learns all she can and draws on her experience in tough situations. As secretary of state, “she was the hardest of workers, getting up earlier and staying up later than anyone, reading countless reports filled with important information, making decisions that might save lives or cost lives.”There is little subtlety to Winter’s depiction, and his author’s note says it most plainly: “By becoming president, she would demonstrate that a girl can grow up to be the most powerful person in the world. That’s the world where I want to live. And this is a story I am thrilled to tell.”

Electing Hillary Clinton would be HISTORIC, right!? It sure would. The idea that America would elect TWO completely unqualified people to the highest office in the land back to back would be indeed be historic!

The story continues with a discussion of the other two “Amazing Hillary” books, and those books are written for teenage girls up to young women. Because let us not forget that the woman who’s career has been built by a known womanizer is the champion of women! After all, women need somebody to make sure they get paid the same as men, have their “reproductive rights” protected, and get that minimum wage!

It’s pretty clear what’s happening here. Hillary Clinton’s own drivel, Hard Choices left many with the easy choice of NOT BUYING THE BOOK! It was a monumental flop. Therefore Hillary must rely on other sycophants to hopefully clean up her image.

In the real world, Hillary Clinton would have been banished to the hither regions of politics with Brian Williams and Keith Olbermann (I know…”Who?” right?). But not when its an election year. The Left has dusted off those old kicks, put on new soles, and they are ready to do some boot-scootin’.

Truth be told, the only way for Hillary Clinton to look good or certainly BE good would be a work of fiction.