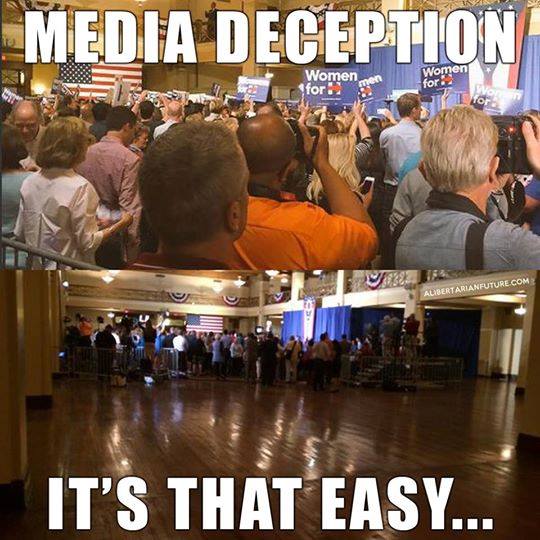 Hillary Clinton is not popular. Look at this graphic and you can see how Hillary’s hype is manipulated by the media.

Remember when she began her “listening tour,” and stopped at a restaurant. Nobody knew her or cared. I quipped at the time that Kim Kardashian could beat Hillary Clinton, if Kardashian ran.

The only hype over Hillary Clinton is with politicos, and they just fear for their lives, as nobody crosses the Clintons politically and lives to tell about it.

Shortly after her “listening tour,” Clinton relaunched her campaign, and they have the overflow area for her announcement. The site was empty, and so was much of the “flow” area.

What the press will not do is expose Hillary Clinton for the fraud that she is. They must create an aura of invincibility. If they don’t hype Clinton up, literally nobody will show up to see her.

When you see a crowd of more than 100 people, it means church is out in the black community, and black Liberals are making a little extra scratch. No black person on the planet gives a crap about Hillary, which is why she met with #BlackLivesMatter. They brought in Katie Perry for one event, in order to make it appear that people were there to see Hillary. How pathetic.

Now she’s hoping Bill Clinton will be able to draw people out, and even that is backfiring, due to him being a rapist. This was a Women for Hillary event, an event for the PROTECTOR of women, and you can see the outcome.

The Left is really scared by this, but they will try to put a good face on it. But know they are scared!