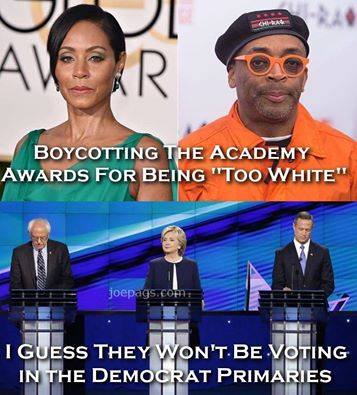 Black Liberals see racism everywhere. Interestingly, white people built Hollywood, but blacks act like it’s the only game in town. If you don’t like it, build something better. If you are going to participate in it, then JUST DO IT BETTER THAN ANYONE ELSE.

Try to imagine Jesse Owens only wanting to run against blacks, or Joe Louis only fighting blacks. What iconic Americana would the world be without. When Owens embarrassed Hitler, it was a win for American and a very proud moment for blacks.

In today’s climate, black Liberal racists like Pinkett-Smith and Lee epitomize the victimization of black America. Spoiled multi-millionaires all too happy to take all that America has given them, yet complain about not having more.

What else should be boycotted, based on their racist rationale?

The Symphony is OBVIOUSLY racist, based on this audience makeup.