Remember when Leftists blamed UBER for this Mass Shooting?

This story about the mass shooter in Michigan has absolutely nothing to do with Uber, and yet almost every reference to the killer called him an “Uber driver.” Note the first story in the graphic where the top article reads, “A simple feature on Uber’s app could have prev…”

There are two issues the Left would like to milk out of this mass shooting: The safety of unregulated Uber ride-sharing services and of course gun control. 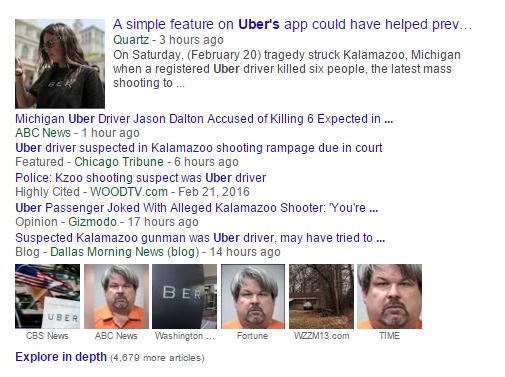 This is amazing, because Jason Dalton, the shooter being a driver for Uber has NOTHING to do with this story, and neither does the gun.

If Dalton drove an ambulance would the story be any different? The only surprise in this story to me is that Dalton is a Muslim convert.

It is reported that Dalton was picking up passengers between his shooting rampages, and The Star reports of one such encounter.

An Uber passenger says he called the police to report an erratic driver more than an hour before authorities allege the driver began shooting people at random, killing six and wounding two others before being arrested.

Matt Mellen told WWMT-TV in Kalamazoo that Jason Dalton picked him up at about 4:30 p.m. Saturday. He said Dalton introduced himself as “Me-Me” and that he sat in front, since Dalton had his dog in the back seat.

Mellen said about a mile (1.6 kilometres) into the trip, Dalton got a phone call and that when he hung up, he began driving erratically, blowing through stop signs and side-swiping cars.

And because of this, we must now talk about the safety of Uber. It would appear that the only people who WEREN’T shot were people Dalton picked up to drive.

According to Gizmodo, the final passengers Dalton picked up survived him as well,

A man from Indianapolis who was visiting the Kalamazoo area talked with the local news and wished to be known only as “Derek.” He, his wife, and his in-laws were at a restaurant, Bell’s Eccentric Cafe, when they heard about the shootings. They decided that they’d be safer using Uber than walking. They were picked up at 12:12am, roughly a half hour before Dalton was arrested.

“My father mentioned from the back seat, you know, the situation with the shooter,” Derek told Wood TV-8. “I kind of jokingly said to the driver, ‘You’re not the shooter, are you?’ He gave me some sort of a ‘no’ response… shook his head…’”

At that point, nobody knew that the alleged shooter was an Uber driver, but for some reason Derek pushed him for another response.

“I said, ‘Are you sure?’ And he said, ‘No, I’m not, I’m just tired,’” Derek told the local news. “And we proceeded to have a pretty normal conversation after that.”

Derek and his family were dropped off at 12:19am and Dalton was arrested roughly twenty minutes later. Derek provided the news channel with his receipt as proof that he was likely Jason Dalton’s last passenger that night.

So Uber passengers were not harmed.

As for guns, let’s face it. Dalton could have done what the woman in Vegas did, and simply mow people over with his car. The gun had nothing to do with this rampage, as Dalton decided on his own to commit these crimes. They say he passed all the tests for crazy. So something set him off, likely that phone call he got right before he began the rampage.

One thing is for sure, and that is Uber will be trying to scratch their name off this story in a hurry.

One other thing: too bad Dalton didn’t have on a Confederate flag, or shoot up a bunch of black folks. It appears that Dalton’s vendetta was against white people since he targeted a Cracker Barrel.

The Frightening Story Of The Village Of Portlock Alaska…Was A Killer Sasquatch Responsible ?
Great American Outdoors