Where has freedom of speech gone?

We recently posted a video of a young man in Texas who got a ticket for “offensive speech” near a university in Texas. Today’s college “toddlers” need things like trigger warning and safe zones, in order to function in society.

We have governor running against their states’ pride and heritage, banning things like the Confederate flag, because somebody is afraid of history. No Confederate flags on anything, including license plates.

And if there isn’t enough limiting of our First Amendment rights, try this one.

Photo taken in St. Cloud and sent to @Masalani. This is allowed? Message the DMV: https://t.co/ApXEHNsEns pic.twitter.com/EsnMQ3Bira

According to Fox 9, a Snapchat photo of the license plate was shared over the weekend on the Facebook page of Somali community activist Haji Yusuf. These are the very same Somalis who are terrorizing Minnesota citizens and arguably the largest US-based jihadis.

Yusuf is a member of Unite Cloud, an advocacy group that seeks to eliminate discrimination against Muslims and other groups. Sure, just like the NAACP represents other “colored people,” right?

The Department of Public Safety confirmed that the license plates were issued in June 2015 and the custom license plate application was processed in Foley and reviewed by the state’s Driver and Vehicle Services.

“This personalized license plate should never have been issued; it is offensive and distasteful,” DPS said in a statement.  “We are in the process of revoking and taking possession of the plates today. The Department of Public Safety apologizes for this error. The Driver and Vehicle Services Division is reviewing its process for approving personalized license plates today and will immediately provide additional review and oversight of applications.”

I suggest the driver’s next plate be FYUSUF, and see what DPS says about that one!

Look, for all we know the plate stand for FM (radio) US (America) and (LMS) the initials of the guys significant other.

We can have Leftist “Pastors” preaching, “God-D*MN America,” burning of the American flag, and that’s not hate speech, but don’t say anything about Muslims or DEMOCRATS!

Some of the comments were pretty interesting. 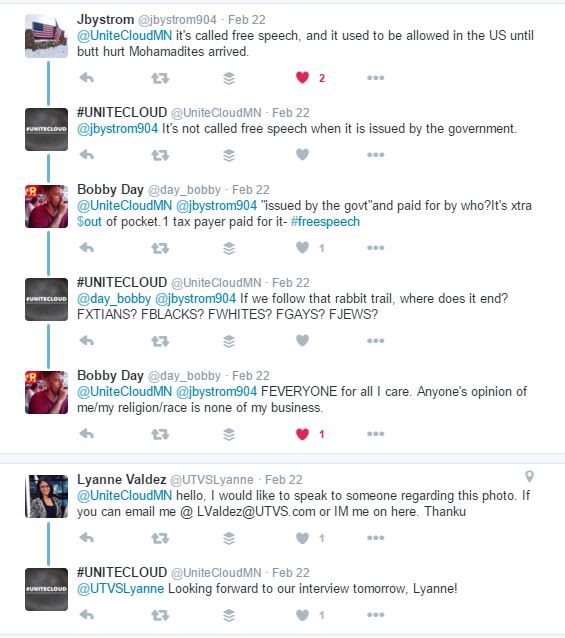