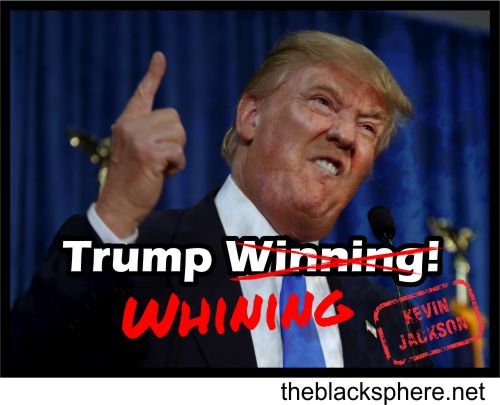 Trump has gone from being the purveyor of truth to Liberals, the BBQer of sacred cows, to the schoolyard bully. He reminds me of Charlie Sheen when he was kicked off his show, Two and a Half Men.

Sheen is a brilliant actor, with lots of problems (of his own creation). His problems caused him to go off the deep end, trying anything to revive his career.

Sheen ultimately did shows all over America that were dismal flops, because he was out of his element. During that time, the phrase “Winning!” was coined.

If Trump can’t have his way, then he’ll take his ball and go home. Whining!

Roger Ailes has told Trump in no uncertain way that Trump doesn’t dictate how Airles runs his business. Will FOX lose in the end? I say, “No!”

People are describing it as playing chicken, but if that’s the case, then Trump is driving a Prius, and FOX is driving a semi. There is no competition.

According to the statement by FOX, Trump has been on their programs 128 times. That’s a lot of earned media, particularly when you consider the audience size of FOX versus other media outlets.

The bigger picture is what this exposes about Trump. Only the most hardcore Trump supporters can dismiss Trumps latest antics.

Trump told reporters in Iowa on Tuesday night that he didn’t like the previous statement put out by Fox.

“Why should the networks continue to get rich on the debates?” Trump said. “Why do I have to make Fox rich?”

I guess Trump is the only person who can get rich? Or perhaps he doesn’t like being used to make others rich?