Donald Trump said that the Democrats might sue Trump, and what does Trump do?

“If @TedCruz doesn’t clean up his act, stop cheating, & doing negative ads, I have standing to sue him for not being a natural born citizen,” he tweeted. 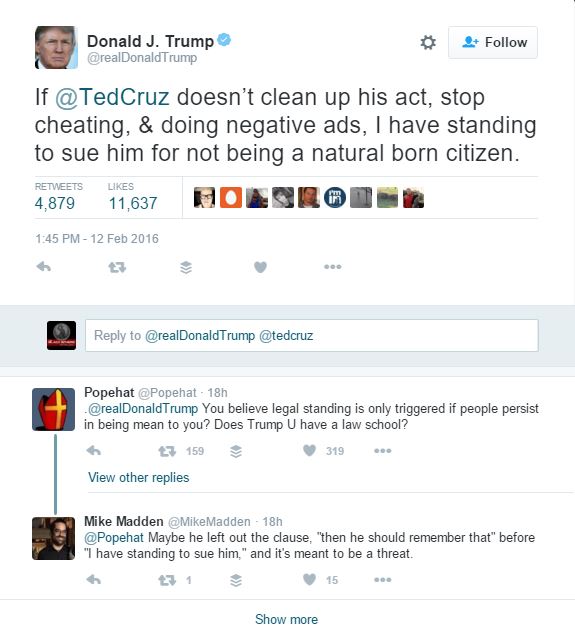 I guess the question has been answered on which ticket Trump is actually running.

Trump has previously argued that if Cruz won the Republican nomination, Democrats would argue that the Canada-born Texas senator was ineligible for the presidency. Last month, Trump asked a rally if he should sue Cruz “just for fun” over the issue.

That’s just what America needs; a man who will sue “just for fun.”

Trump’s problem with Cruz is the fact that he’s putting up and fight, and some might say, “Winning!” Trump admitted that Cruz was a non-issue until he gained in the polls. And now that The Donald is coming off his first win, he likes the feeling.

Recall that Trump said the Cruz eligibility issue was an issue for Democrats. He said he was just concerned for Cruz.

I’m sure Cruz believes that. That The Donald was only looking out for Ted’s well being. No sense going through all this campaigning, if it’s all for naught.

Apparently The Donald’s concern has now shifted from mere concern for Cruz, as Trump threatened to sue Ted Cruz for “not being a natural born citizen” if the Texas senator “doesn’t clean up his act” and stop running negative ads against him.

And if the eligibility tweet wasn’t humorous enough, Trump “Two Corinthians” had the nerve of questioning Cruz’s faith, accusing his opponent of being “so dishonest.”

“How can Ted Cruz be an Evangelical Christian when he lies so much and is so dishonest?” the Republican front-runner tweeted. 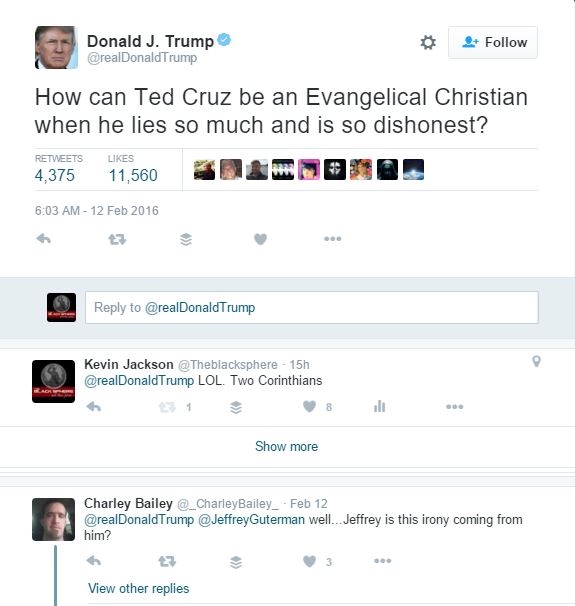 Trump then went into “protect” mode for Rubio on Cruz’s “gay marriage” ads against Rubio, as he had done with Ben Carson back in NH.

In the case of Carson, the protection is ironic, as it was Trump who torpedoed Ben Carson, calling him a loser in this video, and a liar in a previous speech.

In the case of Rubio, his campaign is running campaigns against Trump, so Trump may find himself besieged from multiple fronts.

The outcome of South Carolina will truly be the biggest story so far in the campaign cycle, and if Trump can withstand the barrage that’s coming, as well the very fight he creates for himself, he just might be the next POTUS!