There is no doubt this woman cares about her body. It’s not like we needed her nude to know what’s under the hood. Kim pretty much is “truth in advertisement,” even when fully clothed, ironically an oxymoron with Kim Kardashian.

While admiring the human form has been done for centuries, some people were outraged at the exhibitionist. Surely some of the outrage was based on jealousy, but some might be because they see it all the time. 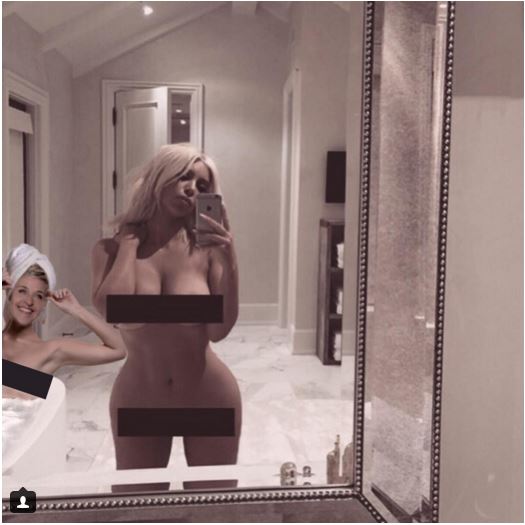 Kim is the woman famous for her “amateur” sex tape, now isn’t she!

What I find most intriguing about the whole story is that while there is back and forth between those who support the nude selfie, calling it expression, and of course the naysayers. There is another underlying issue that is man versus woman.

Love when a man comments on a woman's decision to post a nude photo. Her body, her career. Sexist bullsh*t. @KimKardashian

Apparently, when a woman doesn’t like that Kim posted a selfie, she’s just jealous or perhaps uptight. But when a man complains it SEXIST?

So men can’t comment on women doing [insert whatever here] or it’s SEXIST? Does sexism work only ONE way? I’m sick of the sexist FEMINIST bullshit, that constantly tries to silence men on our feelings.

For the record here are my thoughts on Kim Kardashian.

Kim Kardashian has an amazing body. She likes to show it off because it’s her money-maker. For that reason, I understand what she is doing from a purely capitalist point of view. Kim Kardashian is the reason Playboy is no longer a magazine full of beautiful nude women. Why buy the cow when you can get the milk for free.

I LOVE that Kim Kardashian challenges women in the “it’s my body” versus “she a fricking narcissist.” It’s humorous watching the interplay of “choice”, as Liberal women–most caught up in their looks–can’t compete with Kardashian, and who are mostly jealous have to bite their tongues as Kardashian rakes in the kudos and the riches. What a mindfrick!

Unlike the waif anorexic models who are slaves to their schedules and diets, Kardashian pumps out a kid, then hits the gym (and the plastic surgeon) and voila, she’s back showing off serious drool-inducing curves.

For a funny series of other celebrity selfies, go here…