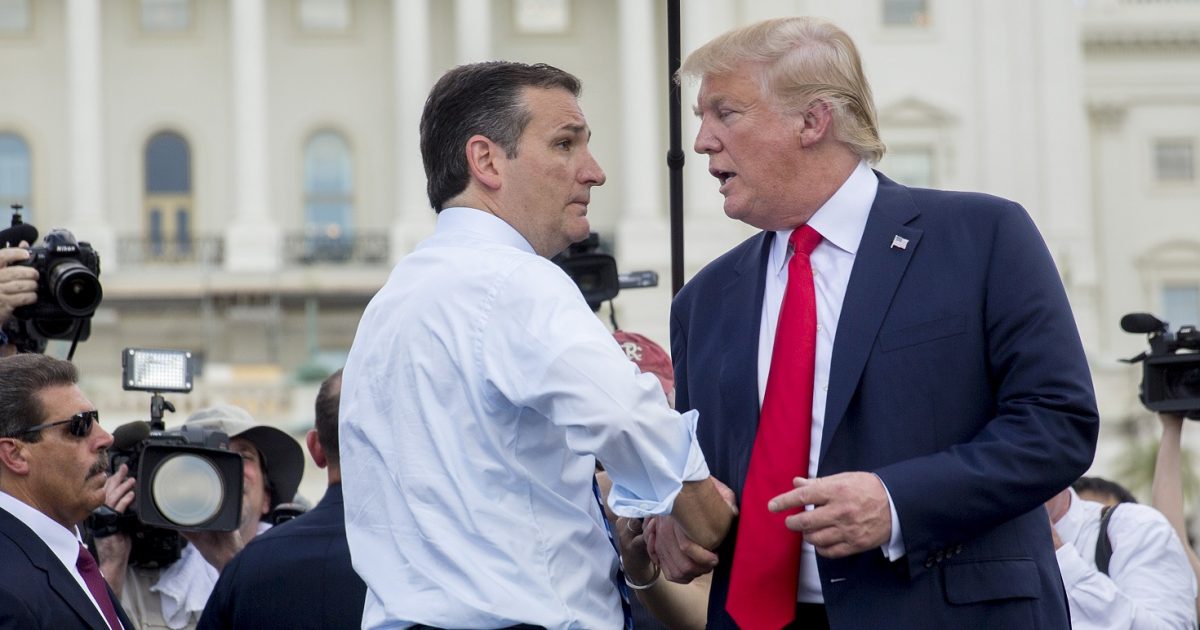 If Saturday taught us anything about the Republican race to the nomination, it’s that Donald Trump is not a sure thing.

That’s an objective fact, that many Trump supporters will take that statement as a slam on Trump. It seems that anything that is not in glowing support of The Donald is taken negatively by Trump’s rabid and often vitriolic sycophants.

Despite what Trumpettes want to think, Saturday’s results were not good for The Donald.

First, the two combatants went two and two;Cruz won two states and Trump won two states. This is not what Trump and his followers would have expected coming off of Super Tuesday, where Trump won seven states. The warning signs were there, as Trump did well in states where Democrats could cross over and vote, but not so well when the voting was limited to Republicans.

The second problematic area for The Donald centered around polling. From Breitbart we get the polling prior to Super Saturday:

The most recent poll in Louisiana showed Trump with a 12 point lead over Cruz. However, around 20 percent of the voters were still undecided. Earlier polls show Trump with a nearly 20 point lead in the state.

Even the latest poll was conducted before the Republican debate on Thursday. Cruz’s strong performance in the caucus vote on Tuesday suggests he will have a strong ground operation on Saturday. Again, it is likely the race is much closer than the poll indicates.

Louisiana also awards some of its delegates based on votes in Congressional Districts. The race between Cruz and Trump is very close in a couple Districts, suggesting the final delegate count could be close, regardless of who wins the overall state vote.

As for Kentucky, here is what was reported:

The only poll of the contest was conducted last week, before the Super Tuesday contests. That poll showed Trump with a 13 point lead over Marco Rubio, in second place. Cruz was a close third in the poll. However, 15 percent of Republicans were still undecided.

The results were that Trump won Louisiana by 3 percent and Kentucky by 4 percent, a far cry from the 12-20 percent range touted for Louisiana and the 13 percent lead (over Rubio) in Kentucky.

Cruz did not finish third in Kentucky, but was a strong second, which doesn’t bode well for poll numbers, something The Donald so readily touts.

As for Cruz’s wins, they were decisive. 15 points in Kansas and 13 points in Maine, the latter being a bit too close for comfort for the Great White Northeast.

A day before the election, I found this article:

The latest polls in Kansas had Donald Trump leading by 13 points, but that was before Super Tuesday, the pleas from Mitt Romney, and Thursday’s out-of-control debate. Kansas is one of the most deeply Red states in the country. It has gone Republican in every presidential election since 1940, with the exception of Lyndon Johnson’s walloping of Barry Goldwater in 1964. It is a very religious state, with 55% referring to themselves as “highly religious” according to a Pew poll. So far, Trump has done well with evangelicals; Cruz will have to reverse that if he wants to win the caucuses in this state.

The result in Kansas had to be a shock to Camp Trump, and though there was no polling for Maine, I doubt any would have had Cruz walloping Trump to such a degree.

Third, in the numerical battle Trump lost. Cruz picked up 64, the Donald 49. In Trump’s defense, there are 20 delegates left, but Cruz will likely retain his lead, even after these are counted.  And then there was the impact of Rubio and Kasich in taking votes from Cruz:

As long as a more moderate candidate is in the race, many of these voters will not go with Cruz. But once they are left with a choice between the two, they would have to get behind Cruz. This was borne out in Lexington and Louisville where Rubio siphoned off enough votes in third place to prevent Cruz from winning enough votes needed to counteract Trump’s advantage in rural, eastern Kentucky. In northern Kentucky, which would have otherwise been a stronghold for Cruz, Kasich played spoiler. Due to the Cincinnati media market, the favorite son of Ohio was able to cut into Cruz’s margins. Rubio/Kasich also prevented Cruz from reaching the 50% threshold in Maine to win all the delegates, costing him roughly 11 delegates and giving Trump 9 more.

This is a 20 delegate swing if you remove Rubio and Kasich.

Trump says he really wants to run against Cruz one on one. As the saying goes, “Be careful what you wish for.”

Tiffany Layne - September 28, 2021
In the wake of George Floyd's death, fiery protests erupted across the nation. Little did we know that there was a traitor in the...

Did China PLAN to Spread Wuflu?