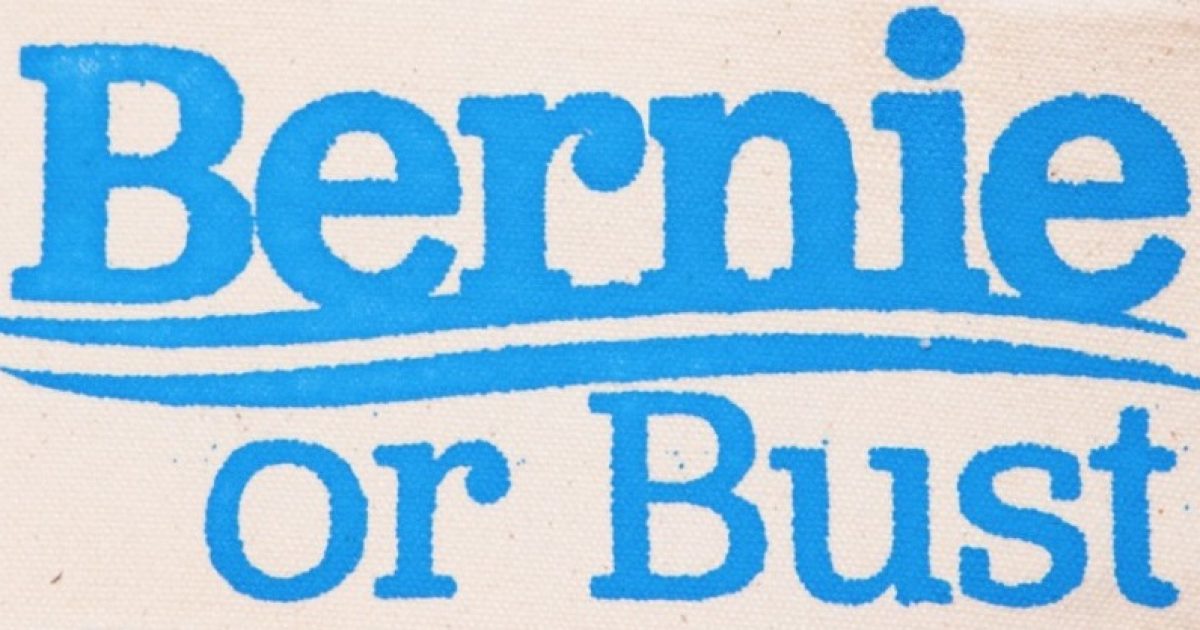 Bernie or Bust is not a choice between Bernie and Hillary Clinton’s hooters! It’s a real movement, and a clear all or nothing choice of Bernie or nothing at all.

Frankly, Bernie or Bust is the strongest movement the Left have put together in quite some time, and the Democrats are about to be cannibalized by the Socialists.

Bernie or Bust is no Coffee Party, and in fact has the potential to be bigger than #BlackLivesMatter.

#BernieLivesMatter is for realz, peeps, and we need to get behind it. Bernie or Bust is the little train engine that is helping to pull the Trump train.

“When you say Bernie or bust, that means if we don’t get Bernie, we’re just not going to automatically vote for the demon because you’re saying the devil may be there,” said Billy Taylor, who is organizing a coalition of Bernie Sanders supporters to protest at the Democratic convention here in July.

Though I disagree with about everything Sanders stands for, the one place we do agree is in exposing the corruption of the political system.

“You can’t expose the corruption of the political system and then expect us to get behind that same political system,” said Gary Frazier, a leader of a group called Black Men for Bernie, who is also organizing Sanders supporters here in Philadelphia.

But the media will tell you that #NeverTrump is the real problem. I suggest they check their own underwear, because I smell something.

“We are prepared to de-register from the Democratic Party and explore other options. Maybe we don’t get it done in this election, but I can damn well guarantee you this: We mean business,” Frazier said. “If Bernie Sanders does not walk out of that thing as the nominee, we can guarantee you from that point on we’ll start the de-registration of the Democratic Party. They have a choice to make.”

Frazier is a black man, and good bet, a former Demoncrat. But long gone are the days of fawning over the Democrat candidate just because for all black people. One poll I read reported that as many as 30 percent of blacks would vote for Trump. You might think this means 70 percent are for Hillary Clinton, but remember “Bernie or Bust.”

Bernie is raiding from the 70 percent who support Clinton. Even if this is a mere 5 percent, that amount is devastating for the Democrats.

The irony is the closer Hillary Clinton gets to the nomination, the worse it gets for the Democrats. The Bernie or Bust crowd is convinced the system is rigged, which is why they will undoubtedly collide with the establishment. Anybody think Hillary Clinton can change their minds?

Hillary Clinton has enough trouble holding on to the people who believe they like her. She is no Svengali, that’s for sure.

As Sanders said at a rally in California, and just about everywhere else he’s stumped,

“It’s an unfair system, it’s a dumb system, and it’s a system we will change.”

It will change, Bernie. It already has for the Republicans. The Democrats are the people who like status quo.

As for Conservatives, take those poll phone calls, and tell them you’re for Bernie Sanders. Let’s help Bernie Sanders build the revolution that puts Clinton on the hot seat, but never in the White House.