La Raza is the racist Latino group who is determined to take over America with Mexicans. At this rate they will only have the Muslims and a handful of black thugs with whom to fight.

Part of the strategy of “browning” America is by getting rid of valid voter ID. This allows more illegal Mexicans to change our laws, and not have a stake in the country.

As reported by The Daily Caller, La Raza has published a guide for Hispanics on where to thwart the will of the taxpaying REAL American citizen.

The pro-amnesty Hispanic activist organization the National Council of La Raza helpfully promoted a Washington Post article explaining which states people can vote in without having to use a photo ID.

“Voter ID laws are at-issue across the country, with newly Republican-controlled legislatures having passed them in numerous states after the 2010 election,” explained The Washington Post’s Aaron Blake. “Most states still request some form of ID, but don’t require it. Another 20 states don’t require identification. In case you’re wondering where your state is at in all of this, a helpful (sic) graphic from the Post’s graphics team.” 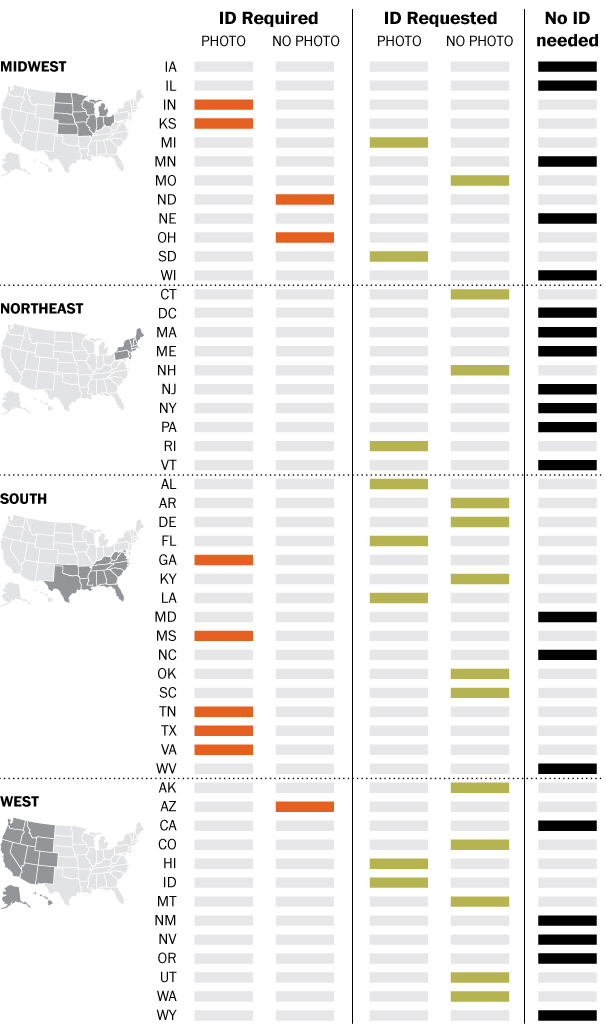 It’s amazing that Liberals can know this type of behavior exists, and they say nothing. They claim that citizens are their priority, as they connive with the enemies of this nation.

The only solution is when politicians have to pay for the laws they pass. They should have to live with their legislation, and I don’t mean metaphorically. If politicians were forced to live with illegals in their neighborhoods, they would not be as interested in allowing these lawbreakers in. Further, politicians’ kids should have to go to public schools with the children of illegals.

Leftist politicians insulate themselves from the scumbags they allow in our midst. They argue that there are good people in the midst, but this is a fallacy. Good people don’t break laws. The good people are in America’s legal immigration system, a system that is bottlenecked by Leftist bureaucrats who WANT this bottleneck. They justify illegal immigration with claims that the legal system is broken.

It may be broken, but allowing an illegal system won’t fix it. They know this, but don’t care.

If you want to see what La Raza (The Race) is all about, look at this story.