Want to know where America is headed? Just look at Venezuela. Socialism and the one-trick pony economy tied to oil has crippled this country, economically.

I recently wrote about people burning a looter publicly, as a warning to others that such behavior wouldn’t be tolerated. The looting continued. Because when the alternative is starving to death, why not take the chance. They can’t burn everybody.

Anarchy rules. And as oil continues its plunge and Venezuela continues its socialism, things will only get worse. The IMF predicts that inflation in Venezuela will go stratospheric, hitting over 700 percent this year.

According to DC Clothesline,

Can you imagine lining up around the block overnight just to be able to shop in a government-run, government-restricted grocery store where you have to be fingerprinted to enter and then your food is allotted to you so that you can only buy a limited amount of a certain item each month?

The L.A. Times recently interviewed a 42-year-old single mother who works as an accounting assistant for the government ministry and lives in Caracas. She makes 27,000 bolivars, including a food allowance, each month. That would equal $2,700 a month normally, but check out how much money she has to spend these days on food and what she has to go through just to feed her children.

In December, she was spending about half her salary on groceries. It now takes almost everything she earns to feed her two children, who subsist on manioc (also known as cassava or yuca), eggs and  cornmeal patties called arepas, served with butter and plantains.

“The last time we had chicken was in December,” she said.

The best deals are generally at government-run stores, such as Mercal and Bicentenario, where the prices are regulated.

To shop there, however, Linares said, she has to line up overnight. Even then, she might come home empty-handed if everything sells out before she gets to the front of the line — or if she is robbed leaving the store.

“The last time I bought food in a Mercal was three months ago,” she said. “They sold me one kilo [2.2 pounds] of rice, a kilo of pasta, a kilo of sugar and a liter of cooking oil for 1,540 bolivars. But to buy the basket of regulated products, I had to buy a watermelon for 400 bolivars. I didn’t want the watermelon and didn’t have the extra money to pay for it.”

These days, she buys most of her food from illegal street vendors known as bachaqueros. 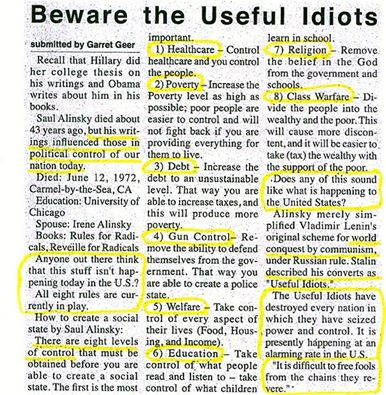 Government stores? Regulated? Check out how Alinsky explained how to get control? Anything seem familiar?

The cost of everything has skyrocketed. Eggs are now an astonishing $150 a dozen. Powdered milk costs between 750 and 1000 bolivars now. Corn flour, which is a staple in Venezuelan diets, went from 9.5 bolivars a pound up to 95 a pound. And the prices for absolutely everything just keep going up.

A 23-year-old named Alejandro who works at a law firm during the day and teaches at night now makes the equivalent of $57 a month. He will sometimes decide to splurge to buy butter, even though the price is now $2, or 4% of his monthly income.