The welfare system is a welfare hustle for the most part. Sure there are those who need welfare. I suggest that less than 10 percent of Americans at any given time really need welfare.

However because of the welfare hustle, almost half of Americans believe their theft is justified.

It takes some serious ethic in the Era of Obama to actually want to go to work. After all, to do what you want to do and still get paid is enticing. Who could blame some Leftists who get paid to watch TV and smoke dope all day. If some cougar wants to finance my future as a crappy lounge pianist and singer, for the right price I might take her up on it. Well, at least if she looked like Angie Harmon. 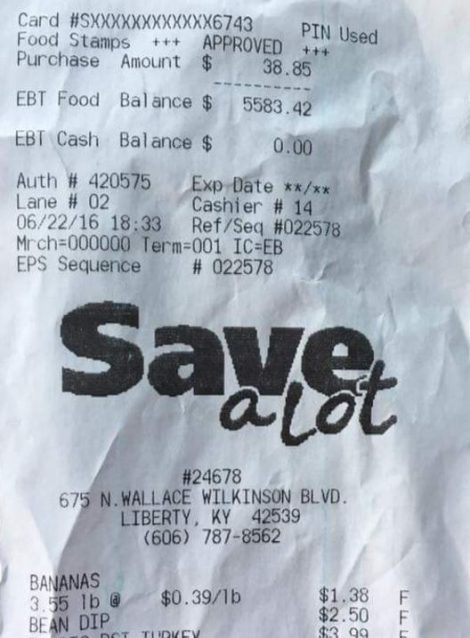 Playing by the rules is for suckers, and that just what this receipt (H/T Red State Watcher) shows. This receipt is supposedly from a Liberty Kentucky Save-a-Lot store. The amount of available credit is shocking.

I know hardworking Americans who don’t have the credit available that remains on this person’s EBT card. So how does one amass that much credit on an EBT card? Was the cardholder in a COMA? For a YEAR?! If not, then how do you get a balance like that and still qualify to be on welfare? I will call one of my friends with an oPhone, and get back with you on that.

And you wonder why these cards end up in the hands of drug dealers and other unscrupulous types. I know of these cards used at stores where everything is marked as a consumable, and thus qualifies for the EBT program.

The people who commit this fraud are as much criminals as the Bernie Madoffs of the world. Sadly, there are millions of these thieves who scam the system. Don’t think the Leftists care. It’s not their money; it’s yours.

The Left will tell you these stories are anecdotal. They will try to convince you that this fraud is rare. They are liars. This crime runs rampant. EBT and other welfare fraud cost American taxpayers billions.

Such is the welfare hustle.