Why don’t Leftist just say what they really mean when they teach of white privilege. White privilege is Leftist code for “blacks are stupid”

Leftist frame the discussion that white kids are born with privilege, because it sounds a lot better, when they essentially declare their superiority over blacks.

Racism is being taught in America by Leftists. A friend of mine and I were discussing children, and she said that she specifically taught her children not to see color. One day she overheard her 11-year old discussing race, and he made the comment, “White people are better than black people.”

She was appalled. She hadn’t taught her child that idiotic notion. So she asked him where he heard that? He revealed, “In school…for Black History Month.”

I had a similar experience, when my then 8-year old son asked me if a white friend of ours, an older gentleman, “owned slaves?” I was incredulous.

I asked my son what would make him think that Mr. Rick owned slaves. He told me that in his inner city, mostly black school they taught that white people owned slaves.

Now certainly they taught that white people HAD FORMERLY owned slaves. However even a bright kid like mine didn’t make the distinction. Further, you can bet that they schools wouldn’t reveal that black people owned slaves back in the day as well. Can’t go bursting that bubble now can we.

This brings me to the story I read in the New York Post about white privilege,

An elite Manhattan school is teaching white students as young as 6 that they’re born racist and should feel guilty benefiting from “white privilege,” while heaping praise and cupcakes on their black peers.

Administrators at the Bank Street School for Children on the Upper West Side claim it’s a novel approach to fighting discrimination, and that several other private New York schools are doing it, but even liberal parents aren’t buying it.

“Ever since Ferguson, the school has been increasing anti-white propaganda in its curriculum,” said a parent who requested anonymity because he has children currently enrolled in the school.They complain the K-8 school of 430 kids is separating whites in classes where they’re made to feel awful about their “whiteness,” and all the “kids of color” in other rooms where they’re taught to feel proud about their race and are rewarded with treats and other privileges.

Bank Street has created a “dedicated space” in the school for “kids of color,” where they’re “embraced” by minority instructors and encouraged to “voice their feelings” and “share experiences about being a kid of color,” according to school presentation slides obtained by The Post.

Meanwhile, white kids are herded into separate classrooms and taught to raise their “awareness of the prevalence of Whiteness and privilege,” challenge “notions of colorblindness (and) assumptions of ‘normal,’ ‘good,’ and ‘American’” and “understand and own European ancestry and see the tie to privilege.” 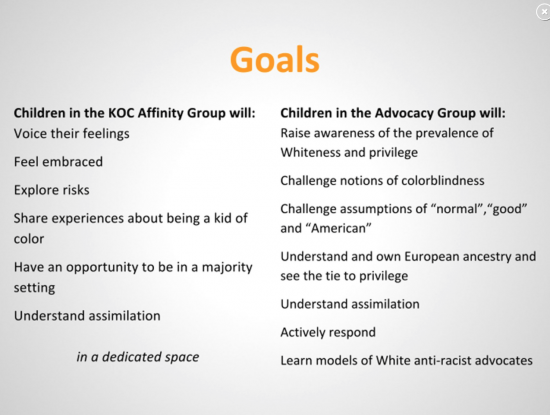 In the year 2016, the Era of a Black President, schools teach kids this nonsense. Since when did our education system become about social engineering? Oh that’s right; when the Department of MisEducation was formed.

Kids are far more non-racial prior to going to school. The Left knows this, thus the indoctrination begins early. That indoctrination continues in college, when black kids are encouraged to take that racist “Ethnic Studies” class. The motto of Ethic Studies?

If you are not militant now, just want until the end of this semester!

Why Americans fund these dens of racism is beyond me. The craziness of the new sissified America will end, when our tax dollars no long fund this. America has far too much money, and that is the root of Liberal evil. These monsters make up problems where none exist.