Black Liberals should all be banished to hell.

When police can’t pull over a black suspect in a crime against another black person, because when black Liberals perceive this as “racial profiling” you know you are too far gone.

That’s exactly what is happening in San Diego, where blacks have called for the resignation of a city councilwoman who dared say that blacks should not be shooting other blacks, and should consider this “racial profiling.”

On July Councilwoman Myrtle Cole held a community meeting in the Encanto neighborhood in her district. Around 200 people showed up to express their views on police and their encounters with black residents.

Cole made the following comments, which she would later regret:

“One of the things that they brought up was the racial profiling issue. That was something that when asked, I said I support my community, but let me just tell you what I want to do is make sure we know that there is more black on black shootings in our nation than ever before — 340 shootings and murders in Chicago the first six months, 120 shootings and murders in Memphis the first six months, 28 homicides here in San Diego. Black on black crime is an issue, and that was never addressed. That’s why when someone says, ‘Do you think there is racial profiling?’ Yeah, because blacks are shooting blacks. They’re not going to stop a white male. They’re not going to stop an Hispanic male or an Asian. They’re going to stop an African-American. That’s what they’re going to stop because those are the ones that are shooting. …

Outside of some bad English, there was nothing wrong with what she said. In fact, she spoke the truth. Why would the police pull over a Korean, if a black people just robbed or shot another black person?

A month or so, in front of my district on Euclid and Market a black man stopped another black man and shot him in the car. So who did they go and look for? They’re going to look for African-Americans who look like the person that was the shooter. And so that’s why we can address black on black crime in our community. I think we would be better off than saying there’s racial profiling. Yeah there is because they’re stopping blacks who shoot blacks. Let’s first deal with black on black crime. Let’s have a meeting on that so we can try and prevent our children from getting murdered and our black children from shooting other black children. That’s what we need to stop.

Again, merely a statement that reinforced here original correct point. She then made sure to be clear that she recognized real racial profiling in this statement:

And that hopefully we will be addressing the racial profiling also. And if there’s a police officer that pulls over another individual 52 times in a year or so, that’s racial profiling. There’s something wrong with that. We have not gone that far yet because I’m making sure that we don’t go to that point.

In case you’re wondering why black Liberals are ignorant racists, understand they chastised Cole for not supporting her community.

A woman who wants criminals out of black neighborhoods, and believes that law enforcement must be able to do their jobs is criticized for not allowing wanton murder and mayhem? 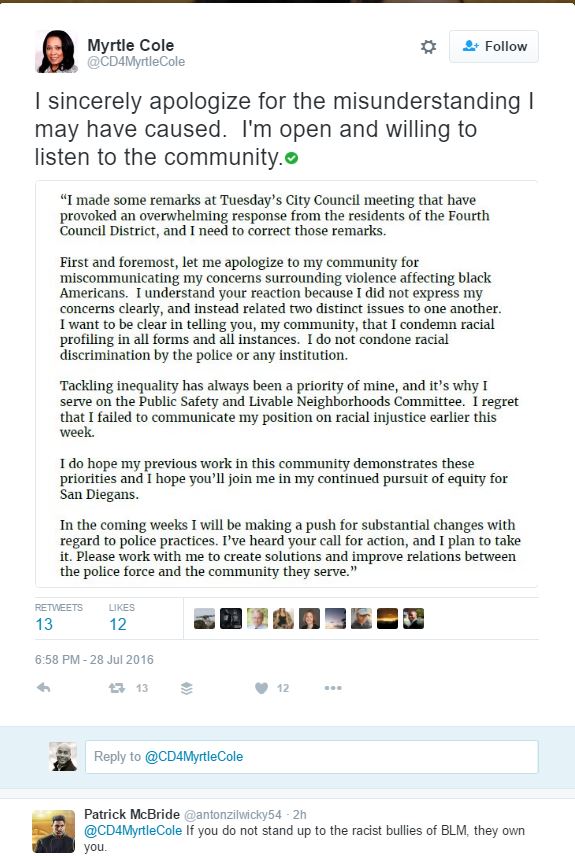 How stupid is this? And you wonder why black America suffers?