Too bad Donald Trump isn’t GAY! Maybe then Albertson’s would bake him a cake?

Conservatives take heat daily. Sometimes the blowback is subtle, and at other times the disdain for Conservatives has all the subtlety of a bullhorn. As it was with CakeGate.

17-year old McKenzie Gill from Bossier Parrish wanted a Trump 2016 cake from Albertson’s. She shared her disbelief at what happened on Facebook.

“Just left Albertsons. The woman behind the cake counter just refused to make me a birthday cake because I wanted Trump 2016 on it. Did that really just happen.” 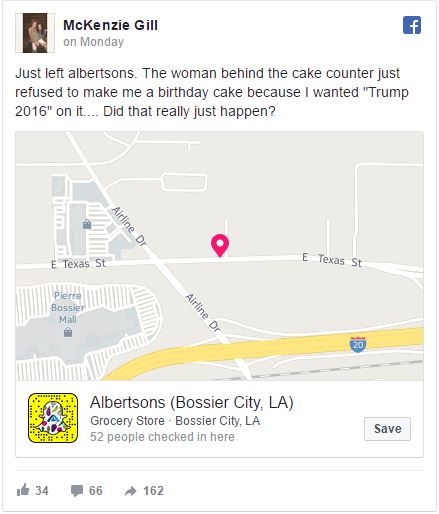 “I was just venting on Facebook when I made the status that I made, I didn’t think I was going to get as much attention as it did,” explained 17-year-old, McKenzie Gill.

The incident deserves a lot of attention; the same attention as “gay” cakes, I’d say.

Gill wanted the cake for her 18th birthday party, as she’s excited about her first vote going for Donald Trump.

“Trump is just someone I really look up to,” said Gill.

Gill and her mother went to Albertson and said,

“We just need an American flag cake with Trump 2016 on it, and right when I said Trump the lady just (makes face) kinda Trump?

According to Gill, the woman said that she could put the flag on the cake, but not Trump 2016.

Connie Yeates, a spokesperson for Albertson’s released the following statement:

“We apologize to our customer in Bossier City for the situation regarding the cake that was requested. Our Bakery staff member misunderstood the training provided regarding copyrighted phrases, and incorrectly informed the customer we could not fulfill her request. We would be happy to provide the cake as the customer requested.”

Copyright? What did Albertson’s Leftist cake decorator think Gill was going to do? Sell the birthday cake for a PROFIT?!

Although that might have been what The Donald would do, I don’t think Gill planned to do that.

Bad judgement for sure. Make the cake, Albertson’s.