While all the nonsense abounds around cops shooting blacks, check out this survivor.

Mark Ross learned to appreciate the police, knowing that things didn’t have to go his way.

After finding out his teenage sister had been killed in a car accident over the weekend, Mark Ross said he wanted to be with his mother as soon as he could.

Without a vehicle, Ross said that he convinced someone he knew to drive, and jumped in the man’s car just after 3 a.m. Sunday in Indiana.  Ross wrote in a Facebook post that they were speeding through Ohio, bound for Detroit, when the lights flashed behind them.

“I knew I was going to jail due to a petty warrant,” Ross wrote.

So we are clear, Ross wasn’t afraid of dying. He was afraid of going to jail, because he had warrants out.

To believe the BLM protesters, Ross was sure to die at the hands of a rogue police officer out for his quota of black people. 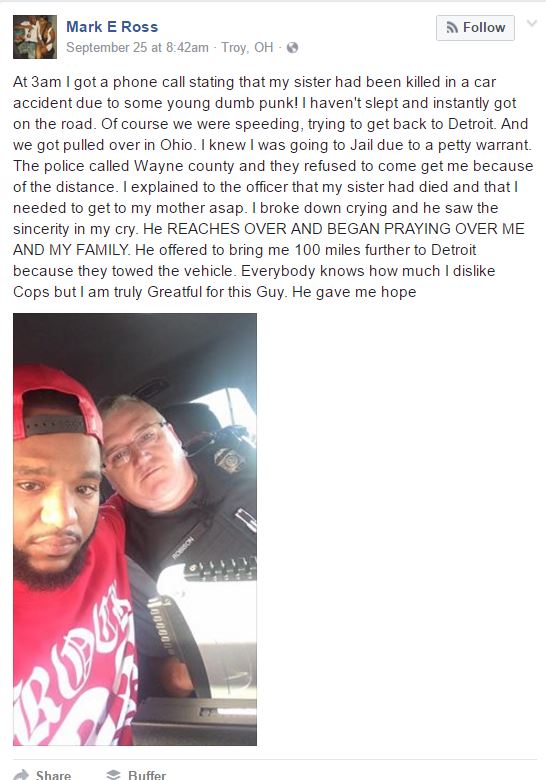 Ross was in the passenger seat of the car when Trooper J. Davis pulled them over, and the driver had a suspended license and an outstanding warrant as well, according to Inside Edition.

Trooper Davis ended up taking the driver into custody and having the car towed, which left Ross stranded in Ohio.

The feeling of helplessness must have been overwhelming. And who could Ross possibly turn to? Certainly not the police, right?

But that’s exactly what Ross did. He asked the police officer for help.

“I broke down crying and he saw the sincerity in my cry. He REACHES OVER AND BEGAN PRAYING OVER ME AND MY FAMILY. He offered to bring me 100 miles further to Detroit because they towed the vehicle. Everybody knows how much I dislike Cops but I am truly Greatful (sic) for this Guy. He gave me hope”

True to his word, Robison drove Ross more than 100 miles to a Detroit coffee shop where he could meet his cousin.

Despite the narrative being set by racist Leftists, the police want to help. They are human beings who understand the human condition. It’s not about color, it’s about humanity.

“It was just so overwhelming,” Ross told Inside Edition. “They were trying to help us.”

Ross and his family said they are so grateful for Robison’s generosity, and that the sergeant has even promised to attend the funeral.

Interestingly, Ross said that people who know him, know that he doesn’t like cops. Let’s hope he and they now have a much better appreciation for the men in blue.