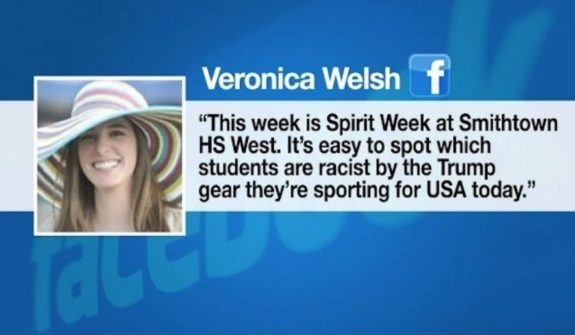 (Originally published on SilenceIsConsent.net) Veronica Welsh, a World Language teacher at Smithtown High School West in New York’s Long Island, has been “administratively reassigned” by school officials after posting on Facebook that students who wore Donald Trump shirts and caps were racist.

In a Facebook post last week, Welsh said “This week is spirit week at Smithtown HS West. It’s easy to spot which students are racist by the Trump gear they’re sporting for USA Day.”

According to The Gateway Pundit, that didn’t sit well with students, parents, and administration.

“It’s not a good idea because then like she influences the students with the same ideas,” (a student) said.

The school’s superintendent called the posting an extremely unfortunate incident and highly inappropriate.

Welsh was not in school Friday, and CBS2 was not able to reach her at her home nor on her phone.

“There’s no reason for her to pass judgement on those kids on a social platform,” one parent said.

Think about it – if Welsh had said such things about Black Lives Matter, she would be on the street. At least her removal from the classroom means she cannot spew her hatred to students on the taxpayers’ dime.