America awaited the long overdue verdict condemning the Black Lives Matter movement, and the liars in it.

BLM should have been declared a hate group, as they openly condoned the killing of police officers. So the idea that these morons would get $41 million dollars due to arrests by police was patently ridiculous. That’s why Black Lives Matter got blasted

According to STL Today, a federal judge agrees:

A federal judge has dismissed a civil rights lawsuit that alleged police used excessive force against Ferguson protesters and violated their civil rights.

U.S. District Judge Henry Autrey on Friday ruled in favor of summary judgment motions filed by police, police officials, St. Louis County and the city of Ferguson. The order appeared publicly in electronic court files Monday, the same day that lawyers for protesters filed a notice that they would appeal.

In his order, Autrey said that the protesters who filed the suit“have completely failed to present any credible evidence that any of the actions taken by these individuals were taken with malice or were committed in bad faith.”

Autrey wrote that protesters were told to disperse, and when they did not and officers were ordered to begin making arrests, those officers gave repeated warnings before they started arresting protesters.

Here is an example of the lies that told in the lawsuit. 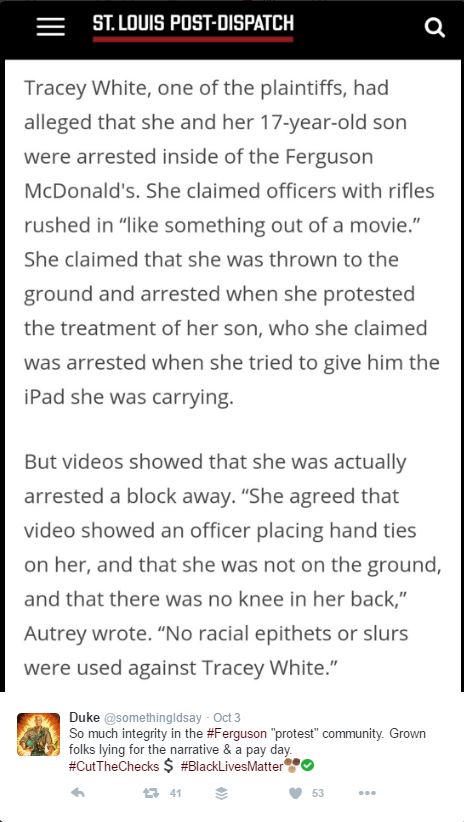 The movement started by a rich white Liberal, built on a lie that continues to get black people killed deserves to die a horrible death.

Speaking of which, what of the death of Darren Seals, BLM activist who spoke of the bogus nature of the people within the BLM movement?

It's been one month since Darren Seals, an activist of the Ferguson movement and critic of its cooption, was killed https://t.co/6WhUZAQ9mu