When it was discovered that Brazile gave Hillary Clinton the questions to be asked, nobody on the Right was surprised. But supposedly that is what got Donna Brazile fired from CNN.

CNN says it is “completely uncomfortable” with hacked emails showing that former contributor and interim Democratic National Committee chairwoman Donna Brazile shared questions with the Clinton campaign before a debate and a town hall during the Democratic primary, and has accepted her resignation.

Hacked emails posted by WikiLeaks show Brazile, whose CNN contract was suspended when she became interim DNC chair over the summer, sharing with the Clinton campaign a question that would be posed to Hillary Clinton before the March CNN Democratic debate in Flint, as well as a possible question prior to a CNN town hall, also in March.

Hillary Clinton is so formidable she cheated to be 74-year old socialist Bernie Sanders at a debate. How pathetic.

Cheating is the only way that Democrats can win. Playing fair is not in their DNA, and is only a talking point to get minions to vote for them.

The Liberal elite get the cushy jobs, and they make sure their children are advantaged as they.  Remember when Chelsea Clinton got the job at NBC making $27,000+ an hour?

In a statement, CNN spokeswoman Lauren Pratapas said that on Oct. 14, the network accepted Brazile’s resignation.

“On October 14th, CNN accepted Donna Brazile’s resignation as a CNN contributor. [Her deal had previously been suspended in July when she became the interim head of the DNC.] CNN never gave Brazile access to any questions, prep material, attendee list, background information or meetings in advance of a town hall or debate. We are completely uncomfortable with what we have learned about her interactions with the Clinton campaign while she was a CNN contributor,” Pratapas said.

CNN had many other reasons to let Brazile go, like when she claimed Michael Brown, Jr was murdered. A bit presumptuous, as it turns out Michael Brown Jr was the garden variety black teen thug.

Or how about this jewel, when Brazile decided people concerned about the growth of Obama terrorist baby, ISIS were “hillbillies,” as she retweeted this: 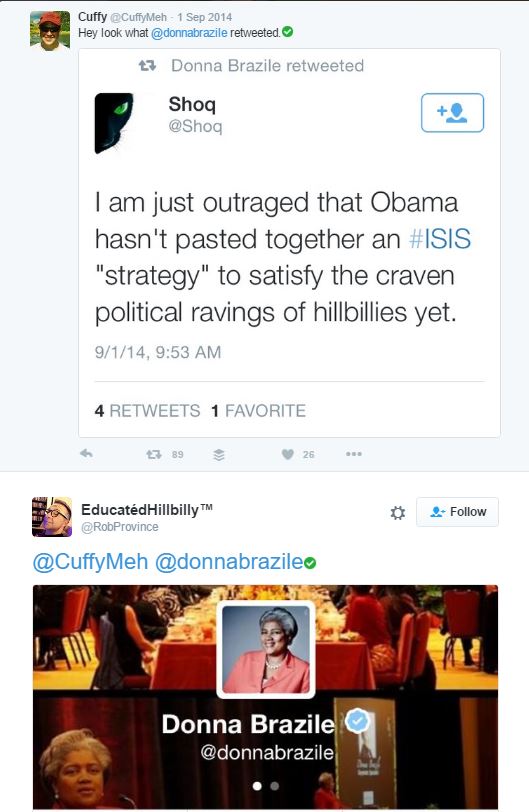 And you have to love when Brazile asked why her healthcare premiums went up so high?

What's on your menu? Just got off the phone with my health care provider asking them to explain why my premium jumped up. No good answer!

All I can say is what took CNN so long to see that Brazile is yet another corrupt Democrat elitist idiot?