We just reported that FBI Director James Comey has informed Congress that they will reopen their investigation into Hillary Clinton’s e-mail scandal.

Talk about the October surprise, and one in which the Clinton campaign cannot blame the Russians; at least not directly.

According to his letter, the bureau has found evidence supposedly in an unrelated investigation that uncovered more of Hillary’s e-mails. This new batch of emails shed doubt on much of Hillary Clinton’s explanations surrounding her server, as well as The Clinton Foundation.

“In connection with an unrelated case, the FBI has learned of the existence of emails that appear to be pertinent to the investigation … I agreed that the FBI should take appropriate investigative steps designed to allow investigators to review these emails to determine whether they contain classified information, as well as to assess their importance to our investigation,” he wrote.

Americans questioned the FBI as more and more emails were released by WikiLeaks pointing to even deeper corruption with the Clintons and those surrounding them.

If these turn out to be significant, add it to the embarrassment that the FBI has already suffered in this investigation. Comey has already performed near-impossible contortions to excuse a lack of action under 18 USC 793(f) by pretending that it requires a mens rea for prosecution. The statute explicitly states that gross negligence rather than criminal intent is enough for felony prosecution for mishandling classified material, and anyone not named Clinton who set up a secret communications system that transmitted and stored classified material would have faced years in prison already.

One has to wonder whether this is part of the rumored revolt at the bureau. Did agents who got furious with Comey over his punt in July go back and revamp their case? Bear in mind that the FBI and the State Department have already acknowledged that classified information — including Top Secret/Compartmented information — got transmitted and stored in the server. What could the FBI find now that would add to that prima facie case? Perhaps an e-mail from Hillary herself instructing aides to transmit classified material in the clear? Well,we’ve already seen that, too.

Now there are rumors that the FBI has cancelled all security briefings with Hillary Clinton. This information has not been confirmed, however there is no reason the agency shouldn’t have done so.

Paul Ryan has suddenly found his spine, as he called for cessation of security briefings of Clinton in this tweet: 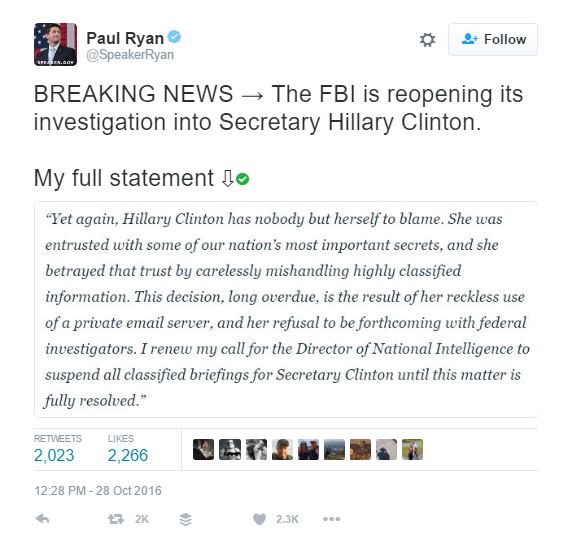 One could surmise that Democrats have figured out that Hillary Clinton must be a casualty of war. They certainly did all they could to save her in their all out assault on Trump.