Rumor has it that the former CEO of the Clinton Foundation Eric Braverman may have fled the country. To Russia.

Though this report is unverified; however the scenario remains a possibility. And here’s why.

According to the WikiLeaks emails, Eric Braverman is believed to be the mole who exposed the the Clinton Foundation. Obtain from Email 25357: 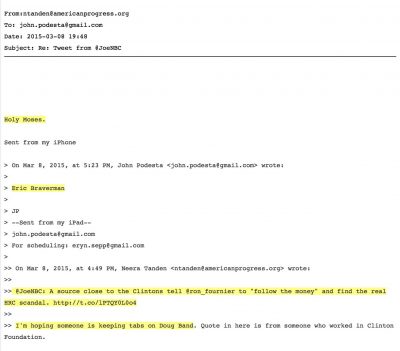 As the WikiLeaks email exchange showed, Neera Tanden, the president of CAP  warned John Podesta to

“keep tabs on Doug Band who she thought was the insider who told NBC to “follow the money and the find the real HRC scandal”.

In 2011 when, Chelsea started to take a more prominent role at the Clinton Foundation, she became increasingly concerned about an internal audit. The audit exposed conflicts of interest throughout the Foundation, specifically related to Doug Band and his company, Teneo.

Believe it or not, Chelsea was concerned about some who she felt inappropriately sought favors from the State Department during her mother’s tenure as Secretary of State.

As the Independent Sentinel reports,

A Politico article from March 2015, summarized Chelsea’s rise at the Foundation and how it threatened some long-time Clinton allies who had grown quite accustomed to the status quo, zero hedge reported.

Veteran Clinton aides had powerful and lucrative positions which they acquired after years with the Clintons. The CEO Bruce Lindsey and President Doug Band felt marginalized by Chelsea Clinton who Band described as an uncaring spoiled brat.

Ira Magaziner is another old-time Clinton colleague who continually shows up in the Wikileaks emails and he too found his role diminished during Braverman’s tenure.

Fearing the repercussions the audit might have on the Foundation, Chelsea brought in new CEO Eric Braverman to change the controversial practices of the Foundation. However, he abruptly resigned a short time later, supposedly pushed out by long-time Clinton loyalists.

Is Braverman hiding in Russia? I don’t know. But people who betray the Mama and Papa Clinton do have a nasty habit of dying young and in unexplained circumstances. If Eric Braverman did flee to Russia, the optics won’t look good for Hillary Clinton.