An NFL player donates his first paycheck to Blues Lives Matter. But don’t get too excited just yet, as the story didn’t begin so well.

At first, this young black football player bought into the lie of the Black Lives Matter movement. Isaiah Cromwell, running back for the Cleveland Browns caused a real stir, when he incited violence against police. He posted a tweet with a photo of a police officer getting his throat cut. 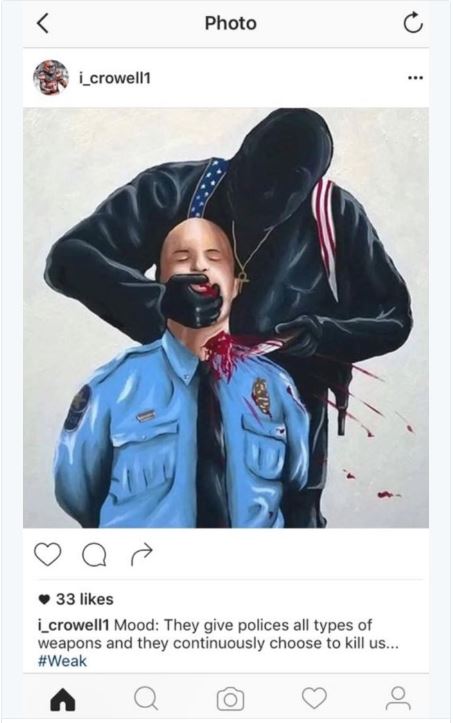 In his apology, Crowell stated, “I am outraged and upset by the deaths of Alton Sterling and Philando Castile along with so many others. I am also outraged and saddened by the attacks in Dallas and the deaths of the 5 honorable police officers (Lorne Ahrens, Michael Krol, Michael J. Smith, Brent Thompson, and Patrick Zamarripa) who were providing protection while trying to keep peace. We have to be better as a society, it’s not about color, it’s about what’s right and wrong. I was very wrong in posting that image. Every single life matters, every death as a result of violence should be treated with equal outrage and penalty.”

President of Dallas Fallen Officer Foundation, Sergeant Demetrick Pennie, said that they didn’t want Crowell’s money, and instead urged him to understand the situation instead of buying into Black Lives Matter nonsense. Sergeant Pennie is now suing Black Lives Matter for inciting a race war.

After receiving his first check, Isiah Crowell made good on his promise and sent $35,000 to Sergeant Pennie who accepted the check on the foundation’s behalf.

For me, Cromwell has more to do. The real penance would be for Cromwell to visit area high schools and speak with kids about black on black crime, and the role of the police in saving lives.

Isn’t this what the Left does?

How many times do they make people sit through “diversity” training, after some bogus racial incident. Well in this case, the police are righteous. And merely writing a check should not be the answer.

Where are the celebrity PSAs extolling the virtues of being a police officer? Surely the NFL can find a wife beater or a drug dealer among their ranks who is performing community service who can be part of this project?