As we are all aware thanks to the crooked Hillary Clinton campaign, Donald Trump is a serial groper.

Woman after woman has now come forward to suggest that Trump should just call himself “Hans.” But we’ve uncovered groping so epic, we simply cannot sit on the story.

In an effort to get to the truth, I asked people (video above) if they met a certain criteria to qualify as #MolestedByTrump2. The responses were shocking.

In this first batch of #TrumpMolestedMe2, you can clearly see the devastation Trump has caused, likely to MILLIONS. How many people visit NYC annually? 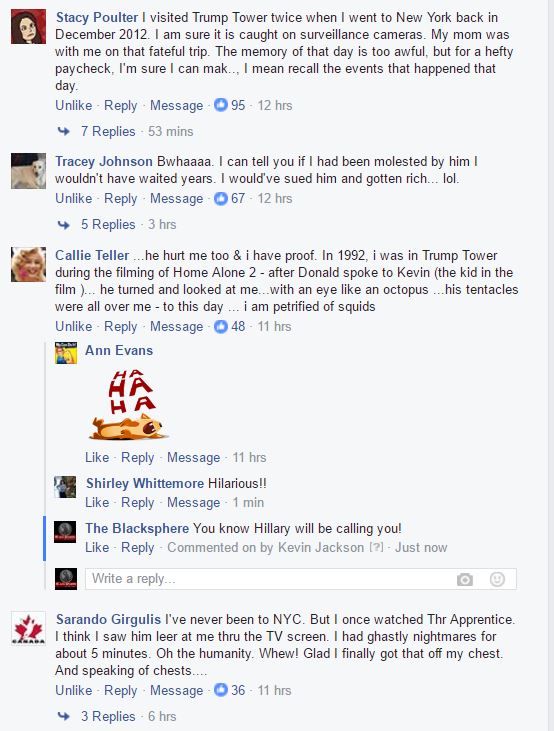 And you can see that like Trump’s Democrat-operative accusers, many of these people have waited DECADES to express their feelings. I’m sure like those Hillary Clinton’s team has uncovered, the victims I found were just too embarrassed to bring it up at the time.

In the next page of document evidence against Mr. Trump, we go international. Omo Jesu Fagbolu Esther felt the reach of Trump’s groping as far away as Africa. 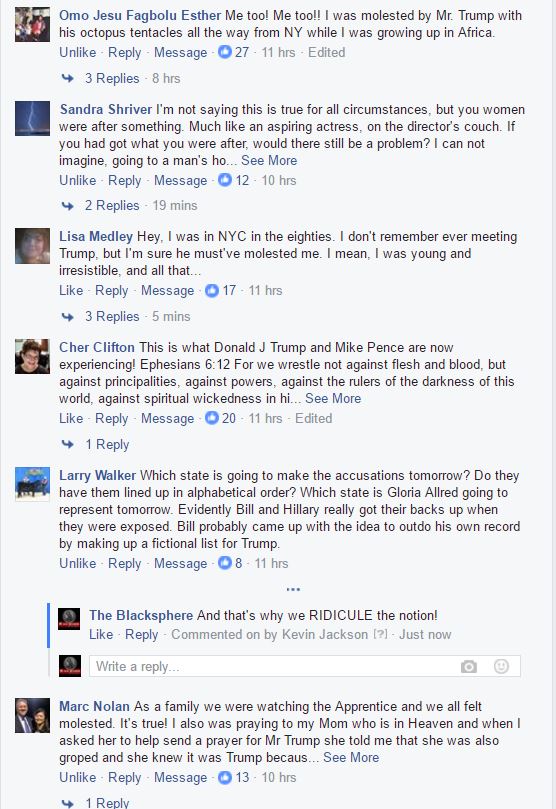 Then there was Marc Nolan. I applaud the bravery of this man, as he admits to Trump’s groping as he and his family watched The Apprentice. As Marc writes,

How sad it that! Marc was groped while being with his family, only to find out that Trump’s groping occurred years earlier with his MOTHER! {shocked music here}

Marc is not the only male Trump groping victim, and indeed Trump cross the color line, as noted in the next series of “GropeFestations”. Turk McDade was groped by Trump.

Read Turks’s tragic tale of a molestation by Trump in a dream, that left Turk #BaldForLife. 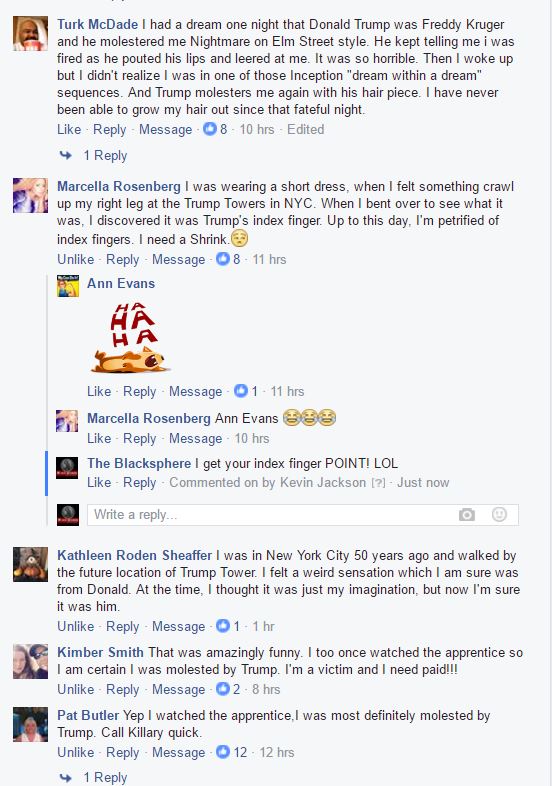 And the tales of Trump molestation continue, with Chantal being groped in Canada while she slept. Marie from Brooklyn,  Mariano, Patti, and I’m sure MILLIONS of others.

Trump must be stopped! 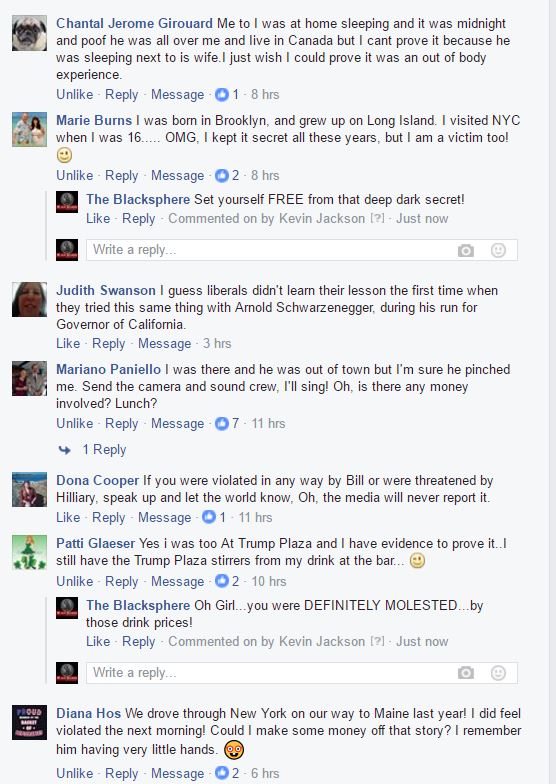 Look at Daniel Bordner’s tragic story. #MolestedByTrump2 through the TV!

HAVE YOU NO SHAME, DONALD TRUMP! 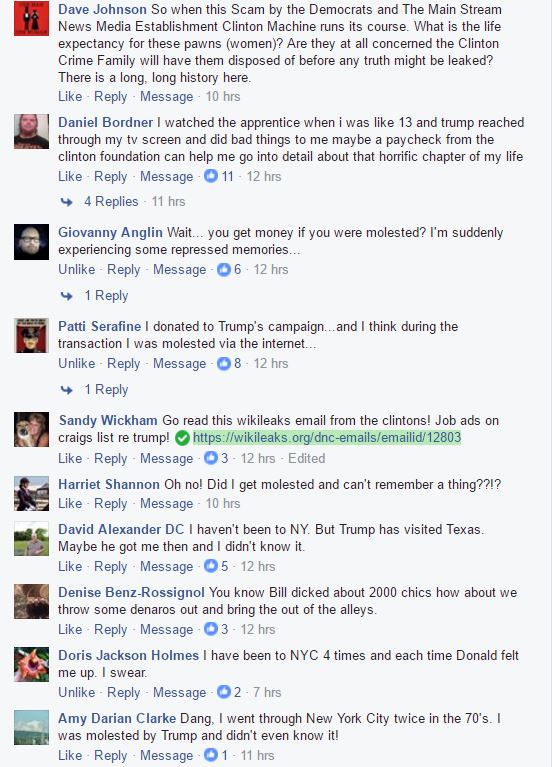 If you have suffered at the hands of Trump (pun intended), let us know in the comments.

Give us your #TrumpMolestedMe2 story, then put it on Twitter with the hastag, so we can document all the stories. 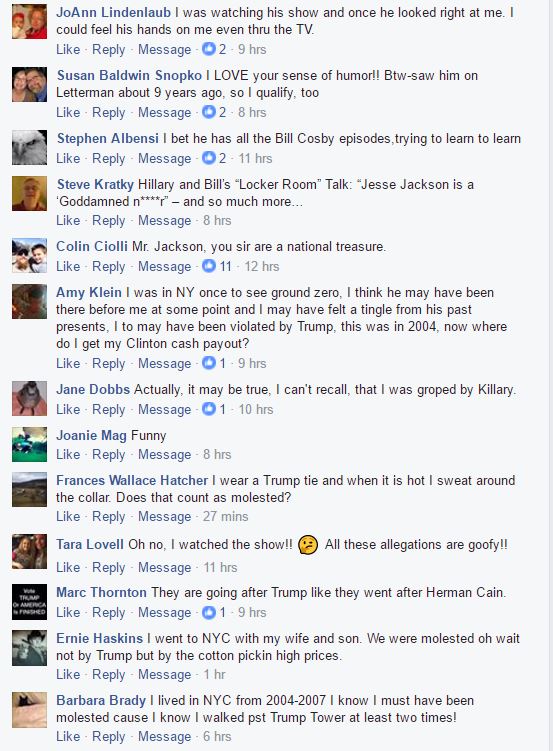