This encounter was not by chance, so it’s obvious that he and President-Elect Donald Trump are talking. Is Mark Cuban jumping on the Trump Train? 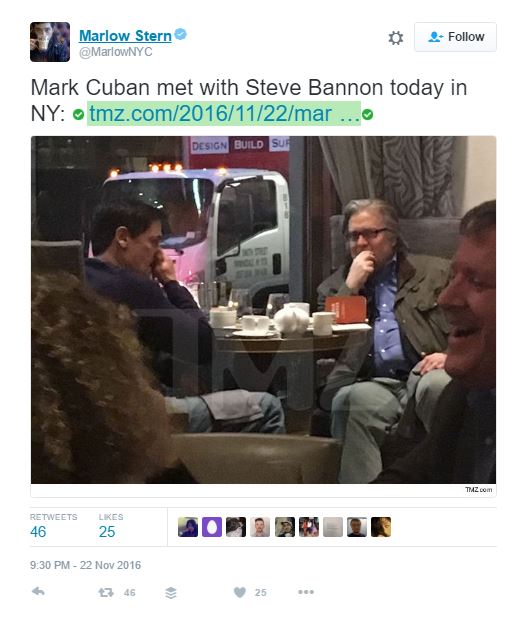 Interesting, since we were told that Trump is not one to mend fences, and holds grudges. He would certainly have reason to, given the recent development where Cuban and two other NBA owners are boycotting Trump properties for their basketball teams.

Have the two mended fences?

Since Cuban wouldn’t comment on the meeting, we won’t know for some time.

What has become evident is President-Elect Trump has reached out to many former anti-Trump, “Never Trump”, or otherwise pro-Hillary people. Though many people may not like this, the strategy makes perfect sense.

Trump includes all aspects of the political spectrum. His style shows that he is amenable, and not as the lying Leftist media portrayed him during the campaign. In a clever way, Trump’s moves have proven the Leftist media should never be trusted.

He even offered an olive branch of sorts to the still smarting Hillary Clinton, when he said he wasn’t going to pursue her crooked foundation. This doesn’t end Hillary Clinton’s problems. But it does make Trump appear magnanimous. The move put Trump above the minutae of such trivialities, something Obama tried unsuccessfully to do.