Here’s some white privilege nonsense for you. It involves a young student named Robin.

But when it comes to “white” things, there are apparently too many of them. For Liberals, white things are far too dominate. As an aside, I suggest that paying one’s bills on time is a white thing, but that’s just me.

Robin is bombarded so much with white things, thus is a victim of “white privilege.”

The Grio reported on what I call white privilege nonsense.

Robin, a senior at Fayette County High School, received a standing ovation at her school when she gave a thoughtful and insightful speech explaining what white privilege is to her entire class.

Robin runs the People of Color Union club at her school, and so when her teacher encouraged them to choose their own topics for their speeches, she felt that she should choose one that addressed the injustices and systemic discrimination facing people of color.

“[Our teacher] tells us the area where we should create our topics and we all create our own individual ideas,” she told BuzzFeed News. “She told our class we had to do an informational speech so I was like, ‘Hey, why not discuss this with my class.’”

While Robin used a few slides for her speech, most of it was just spoken word as she directly addressed the myth that white privilege does not exist and backed up her information with facts.

“[White privilege] affects our daily society in our magazines … children are also influenced and I used the doll test as a reference,” she said. “We live in a Eurocentric society.”

Robin received a standing ovation for her speech and posted a picture of herself standing in front of one of her slides to Twitter, where it has gone viral, receiving both hate and praise.

I guess there just aren’t enough black things for Robin to do? When she ventures off the plantation to do white things, she confronts the notion that she’s a victim?

How DARE she read Elle, instead of Essence! It’s the white privilege creeping into her life as a human, who happens to be black.

Robin is not taught that there are only “human” things. If she eats Chinese food, is that white privilege or Asian privilege? Just curious. 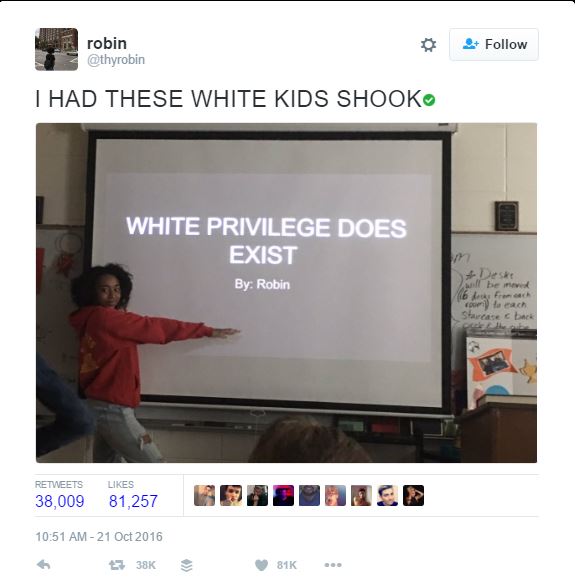 As you can see in the screenshot, Robin was happy to “shock” white people. She did her part to help them recognize their racism, none of which Robin knows or experiences.

Now Robin is rewarded for her good works of beating down or “shocking” white people into political correctness.