I argued with Leftist Richard Fowler about Adam Saleh, who had recently been kicked off a Delta flight for causing a stir among other passengers.

Saleh claimed that he was only “speaking Arabic” and that caused other Delta passengers to have a conniption. The truth is Saleh is known for causing such situations, mostly in an attempt to profit from what the Left call, “Islamophobia.”

From “Being Classically Liberal” we learn:

In a video that went viral today, a young man named Adam Saleh films himself on a Delta Airlines flight being kicked off.

In the short video, he claims that he is being kicked off merely for speaking in arabic, and he calls the flight attendant and passengers racist.

Now social justice warriors are freaking out over Delta Airlines supposed bigotry, and some are proposing to boycott the company.

Glenn Greenwald of the Intercept, for example, wrote that, “This is now a moral crisis for the US airline industry. They should be removing the irrational bigots, not the victims of their irrational fears and hatred.”

Well guess what? Adam Saleh is a youtuber who is well known for trying to bait people into giving him the opportunity to make a scene.

THIS IS THE GUY WHO ADMITTED HE FAKED A VIDEO WHERE HE WAS STOP AND FRISKED MERELY FOR BEING MUSLIM IN NEW YORK.

And according to Delta Airlines, who is investigating the situation, Saleh caused disturbances which made “more than 20 customers express their discomfort.”

This guy’s story that he was kicked off the plane merely for speaking Arabic is bullshit.

Here is more evidence of Saleh posing as a “Muslim on a Plane.”

As you can see, Saleh gets his jollies on passenger reactions. 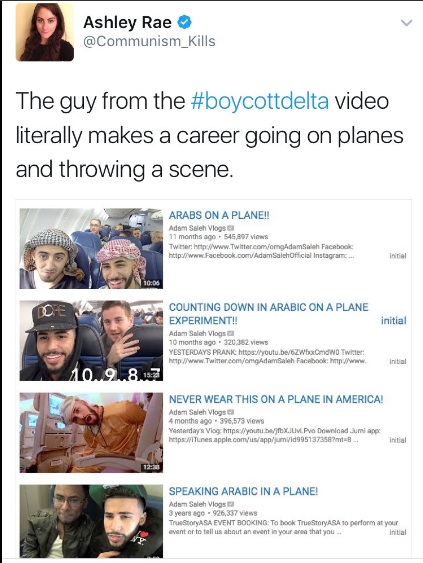 I suggest that next time Saleh flies Delta, the airline seat him and his friends between a few Marines. Let’s see how well the “gag” goes, when the lights go out.

The idea that this Muslim prankster would toy with the emotions of the general public so whimsically sickens me. However, the uber-Liberals who support his “freedom of speech” infuriate me more. They condone the atrocities we read about and far too many non-Muslims experience daily.

Hardly anybody has a problem with Saleh speaking Arabic. But we do have a problem with him playing on our tattered, radical-jihad-sensitive emotions.

In the times we live in, Delta could have easily capitulated to this terrorist prankster, allowing him to “punk” them. Delta held firm.

Delta trusted the eye-witness accounts of passengers who entrust their lives to the company, and the company acted accordingly. They removed the miscreants.

Passengers saw something and said something.

Sadly, Muslims are worse off allowing these so-called pranksters to promote a very real narrative, as those who practice Islam claim to be the religion of peace. I doubt they learn the real lesson from this, but at least the good guys won this round.