The political party that booed God at their convention come to God’s defense? Nice try, you Leftist heathens.

Democrats all but made Barack Obama the living God–big “G” intentional. They thought of that moron as their messiah, and acted as such.

Overstating Obama-worship by Leftists is impossible. In this short video, Jamie Foxx referred to Obama as “Lord and Savior.”

But as Dathan, played by Edward G. Robinson questioned in Cecil B. DeMille’s Ten Commandments,

Well Conservatives are sanctimonious enough to know that Donald Trump is not God.

However, when the Republican National Committee issued its Christmas message, Democrats suddenly found their religion:

The Republican National Committee came under fire on Sunday after some said its Christmas message compared Donald Trump to Jesus Christ.

“Over two millennia ago, a new hope was born into the world, a Savior who would offer the promise of salvation to all mankind,” the message from RNC chair Reince Priebus and co-chair Sharon Day said. “Just as the three wise men did on that night, this Christmas heralds a time to celebrate the good news of a new King.”

The “news of a new King” set off social media users, including some who saw the statement as a clear reference to Trump’s election.

Yes, you read that Reince Priebus statement correctly: literally refers to Donald Trump as a "King" and compares him to Jesus Christ.

Calm down, Leftists. The RNC Christmas message was not about Trump.

Unlike idol-worshiping Liberals, for Conservatives there exists but one God. And Trump is not Him.

Nevertheless, God undoubtedly decided Trump would be the new king of America. He also decided to punish us with Obama beforehand, so we would recognize the lifeline he would toss a drowning America, when Trump came along.

Thankfully, we didn’t dismiss the potential to save ourselves.

And to Chris Rock, I add that we don’t consider Donald Trump to be our daddy, either. He’s just a guy we decided should show Liberals what a really good man leading the nation looks like.

Below are more God references of Obama from the Left, for those who thought I was kidding about how the Left felt about him. 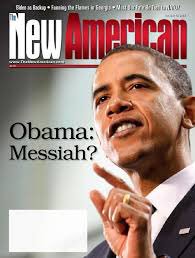