Andrew Breitbart was ahead of his time. He certainly died too soon.

But one can’t help but believe he would be proud of his legacy, and the fact that his partner, Steve Bannon is the right-hand man of the next President of the United States.

Remember it was Breitbart, with the help of James O’Keefe who broke the ACORN story. Our very own Kevin Jackson got his break on FOX News’ The Glenn Beck Program, where he discussed the exposé.

Now we have Hillary Clinton and John Podesta’s email archive published by WikiLeaks, but before WikiLeaks was even part of our lexicon, Breitbart predicted something disturbing that has only been brought to light recently by WikiLeaks.

It seems ACORN was the tip of an undiscovered iceberg, as journalists James O’Keefe and Hannah Giles discovered while undercover at ACORN, pretending to want to bring in underage sex workers into America. This Twitter thread showcases much of that discussion.

However one post sticks out more than the others.

We highlighted the date, so you can see when Breitbart first mentioned Podesta and the underage sex slaves. It was 2011, years before it pinged on anyone else’s radar. 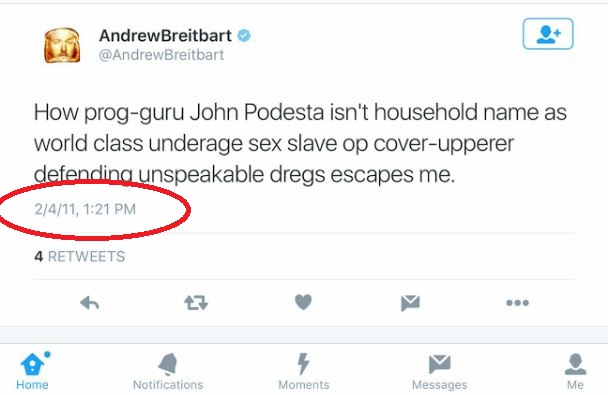 It begins with the Podesta emails. Stern, from State, tells Podesta, “I’m dreaming of your hot dog stand in Hawaii.

The phrase seems utterly out of context and meaningless within the email…until we find out that “hot dog” is pedophile talk for “little boy.”

Now go to Breitbart’s 2011 tweet, where he directly calls Podesta out for playing coverup in a pedophile ring. Breitbart is not fooling around; he is making a direct accusation as a guy to whom people told their secrets, believing they finally discovered a warrior who would expose injustice and fight the establishment.

James Alefantis, the owner of Comet Ping Pong, a Washington D.C. pizzeria, was recorded multiple times on White House visitor logs from December of 2010 to April of 2014, entering at midnight and staying for hours.  And Alefantis claims he’s simply a victim of  “fake news.”  Yes, there are a lot of online idiots taking things way too far with him and his people, but does that mean a story doesn’t exist? I don’t think so. Another pizza joints on the Comet Ping Pong strip center also seems to have connections to the world of pedophilia, as it bears a logo from the pedophile art world. Alefantis also has connections to  artists who regularly produce pieces that are undeniable odes to pedophilia.

John Podesta’s brother Tony is an art collector. His prize hanging gold statue called called “Arch of Agony” mimics the pose in which Jeffrey Dahmer arranged his decapitated corpses.
There are several other pieces of circumstantial evidence– bits and pieces of info, language, logos, artwork, the pizza places that are located 4 minutes away from Podesta’s house, the use of pedophilic language in Podesta emails — pieces which add up, in my mind, to a concept so horrible that I know needs investigation, yet part of me is afraid of what we will find when we get to the bottom of this Pandora’s box of pedophilia.
This alarming circumstantial evidence clearly needs more investigation. We need to do more than roll along in ignorance, trusting that what we are being fed is the truth.

Breitbart was truly ahead of his time in bringing this to light. I think we owe it to him to investigate until completion.