Trump just picked a fight with the entire world—literally. 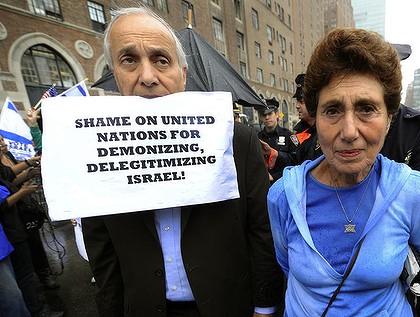 So essentially Obama’s administration stood idly by as the U.N. voted to condemn Israel for building apartments on their own land.

Obama shrugged his puny shoulders and asked his caddy for a 7-iron.

As a permanent member of the U.N. Security Council, the United States had the power to single-handedly veto the resolution. Nevertheless, Obama refused to take a stand.

In contrast with our Coward-in-Chief, incoming President Trump responded to the vote. He called the U.N. “just a club for people to get together, talk and have a good time.”

Born of FDR’s globalist vision for the world, the United Nations was created to facilitate world peace. Instead, it mostly turns a blind eye to injustices and atrocities. And as in this case, the group actually plays an active part in the injustice.

Since its inception in 1945, the U.N. has done little to nothing to stop evil. Sadly, the organization prefers United States police the world, as it watches and complains.

Below are a few examples.

The list of U.N. failures is longer than Justin Timberlake hits.

In Syria Assad’s troops walk the streets, gunning down innocent civilians. In fact, Assad’s troops are so vicious that there have been reports of people trying to get shot to avoid torture at the hands of the Syrian dictator’s loyalists.

The world had a chance at the beginning of this conflict to put down Assad and support democracy (remember Obama’s red line in the sand?). However in what’s become U.N. tradition, Syria along with ISIS-infiltrated rebels continues it oppression of its citizens.

As Trump suggested, the U.N. talks and talks, but rarely acts. And when it does, the actions are rarely honorable, but political.

Perhaps China, Russia, and Obama, believe that the Jews haven’t been bullied enough yet.

Israel’s Ambassador to the United States, Ron Dermer claims that the U.S. actually orchestrated the vote to condemn Israel. And he said Israel has “ironclad” proof that the Obama administration coordinated the vote and even helped to write the resolution condemning the country.

So why did our U.N. ambassador abstain from the vote?

Thankfully, our Coward-in-Chief Obama is on the way out. Our new President-Elect Donald Trump has promised to deal with the U.N. very differently from Obama. You can bet the U.N. has been put on notice.

Kyle Kirker is a former Congressional speechwriter and campaign staffer. He now works as a chemist in the private sector and is an editor for TRPolitics.com.