Obama will soon footnote history with an asterisk that denotes, “He’s a Negro; that is all.” And Trump will be credited for taking him down.

Liberals know that unlike Obama, Trump doesn’t talk; he acts. And that fact makes Liberals fearful, as they cashed in the 401(k), the pensions, and redeemed the gold to bet on baby black Jesus. But in only a few short weeks Trump has shown Liberals that they bet the farm on a goat.

So before Trump officially repossesses the vehicle from Obama for lack of payment, Leftist rags are already criticizing him.

Donald Trump’s threat to American democracy is both self-evident and real. But as more and more evidence accumulates, it’s equally clear that he’s less of a radical departure from the conservative past than an extension of it. In effect, Trump is an adaptation to the peculiar twin realities of conservatism: its policy failures and its political success. Almost every right-wing policy has backfired: trickle-down economics, “free trade,” neocon warmongering and the various fronts of the culture wars. Yet Republicans control both houses of Congress and a large majority of state legislatures.

Allow me to put this another way. Trump inherited the mess that Obama created by being the worst Democrat on the face of the earth. And people who read Salon put Obama in office.

Let’s look at their grievances.

Trickle down economics? How about trickle up economics!

Just ask roughly 1,000 people at Carrier, another 200 at U.S. Steel in IL (with more on the way), and a few hundred announced “good paying jobs” in MI with Dow Chemical.

Then there are the futures, e.g. Ford not leaving America, IBM adding 25,000 jobs, as well as SoftBank’s $50 billion investment, and 50,000 estimated future jobs.

That trickle tickles the hell out of me! 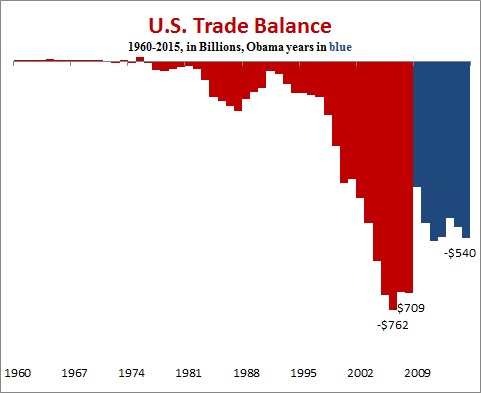 I’m not going to address trade, since Obama’s policies are so horrible, Salon should be embarrassed to bring trade up. But warmongering?
Under Obama, America remains at war on multiple fronts, and the terror battle has hit American shores. We spend billions of dollars fighting the War on Muslims–let’s call it what it really is. Then, to calm our fears, Obama brings more unvetted radicals to our shores.
The article continues, this time touting Trump as a political “insider,” and not the change agent he claims to be.

Trump’s visibly something different from previous Republican leaders, to be sure. But that’s a recurrent feature of conservative politics, as Corey Robin argued in his book “The Reactionary Mind” and echoed on Salon last March:

Outsiders like [Edmund] Burke or [Margaret] Thatcher — even Donald Trump, who’s never been a Republican, much less an officeholder — have always been necessary to the right. They know how the insiders look to ordinary people — and how they need to look.

Trump? The man who broke the back of the GOP is considered an insider by the delusional Left.

Then, I love the comment regarding “even Donald Trump, who’s never been a Republican, much less an officeholder,” where the writer admits that Trump is not an insider. Logical much?

Truthfully, the Republicans wanted Trump’s balls cut off, bronzed, and displayed on Paul Ryan’s desk. They did everything they could to disrupt Trump, because Republicans are AAA team for Democrats.

Next, the author goes on to attack Trump’s cabinet.

The whole point of such outsider rejuvenations of conservatism is to reinforce the defense of hierarchy ever more deeply. That’s exactly what’s becoming clear with Trump, as the outlines of his probable policy direction are starting to emerge through his top-level appointments. While many Trump appointees are unorthodox — because they lack experience or have long personal relationships with the president-elect — there are few indications that he’ll change direction from past conservative policies. He is more likely to accelerate and even supercharge them, acting as a typical conservative rejuvenator.

I suggest that Trump bringing in outsiders, proves he is not insider. Trump hires successful people who have no dealings inside the beltway. Trump’s people can’t be bought, thus there are no political payoffs in Trump’s cabinet.

Trump brings competence back to DC, something DC has lacked for decades.