Earlier this week Planned Parenthood affiliates in Indiana and Kentucky posted a promotional code for supporters to request that Chili’s donate 15% of their pre-tax meal purchase to fund abortions.

“Bring this voucher when you visit (dine in or to go) the Chili’s location identified below and 15% of your pre-tax purchase will benefit:  Planned Parenthood of IN & KY.”

The now-cancelled promotion began on Jan. 1 and was set to continue until March 31.

LifeNews contacted one of the restaurants included on the voucher and staff were not familiar with the voucher.  A manager was not available to speak to at the time.

Why would any restaurant think customers would find baby killing appetizing?

Believe it or not, this is not the first time Chili’s solicited customer help to fund abortions through Planned Parenthood.

A Chili’s in Sacramento, California staged a similar fundraiser a few years ago for a local Planned Parenthood clinic. However their restaurant eventually cancelled the scheme after pro-life advocates complained.

According to a Chili’s corporate spokesperson,

“The event was canceled after hearing growing concerns from our guests.” Management of the Natomas Chili’s received numerous calls, as the Sacramento community expressed concerns about Chili’s restaurant donating money to Planned Parenthood, which performs over 330,000 abortions every year.”

97 out of every 100 women who come to Planned Childlessness receive abortions, according to Wynette Sills, a pro-life advocate who was monitoring the situation.

Although Chili’s officially cancelled the abortion fundraiser at their Truxel Road location, the restaurant did give $200 to Planned Parenthood’s Sacramento chapter, as compensation for the last minute cancellation, Sills informed LifeNews.

What a Disgusting Promotion 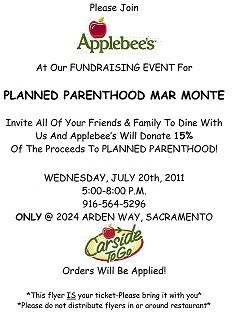 Thankfully, not one person redeemed their voucher.

How About Abortions and Yogurt?!?

A Big Spoon Yogurt in Sacramento, offered a 30% fundraising opportunity for Planned Parenthood in 2011.  But, store manager Armen Vahanian said that because this promotion raised little to no money, Big Spoon will re-evaluate which non-profits they promote going forward.

Despite their non-profit status, Planned Parenthood is a for-profit business.  They sell baby parts, charge their customers for abortions, and receive our tax dollars in what is erroneously called “federal funding.”

Pro-life has won a few of these battles, so kudos to those who believe children deserve a chance. Keep up the good work.