Mattis did this in only his first three days on the job.

Mattis directed 26 strikes on Inauguration Day. He then called for 31 strikes the following day, just to make sure the enemy got the message.

God may have rested on Sunday, but Mattis didn’t. The general-turn-diplomat next ordered 42 airstrikes on the Sabbath, as part of Operation Inherent Resolve.

To put these bombing missions in perspective, the United States and its and allies have averaged around seven airstrikes on Syria per day since September of 2014.  In his first three days, Mattis quadrupled that average.

For those who may have missed the memo, one of the campaign promises by candidate Donald Trump issued was to “bomb the shit out of ISIS.”  The President-elect committed to eradicate ISIS from the world, a commitment makes for a safer world, and a much safer America.

And then came the icing on the cake.

We learned that an ISIS leader was captured.

The ISIS leader Abu Bakr Al-Baghdadi has been wounded and captured during Mattis-ordered airstrikes in Al-Ba’aj.

“Every action we take will be designed to ensure our military is ready to fight today and in the future,” Mattis said in a statement released Jan. 20.  “Recognizing that no nation is secure without friends, we will work with the State Department to strengthen our alliances. Further, we are devoted to gaining full value from every taxpayer dollar spent on defense, thereby earning the trust of Congress and the American people.”

How Did Obama Handle ISIS?  C’mon!

Obama blocked US airstrikes against ISIS targets 75% of the time. Then, an Obama administration policy demanded the utterly unrealistic goal of zero civilian deaths or collateral damage.  That policy allowed ISIS militants to gain strength across Iraq, recruit, and continue committing terrorist strikes throughout the region.

US military pilots reported they were prevented from dropping three-quarters of their ordnance, because the Obama administration “would not give pilots clearance even when they had a clear target in front of them,” explained Rep. Ed Royce (R., Calif.), chair of the House Foreign Affairs Committee.

When asked to address Royce’s statement, a Pentagon official defended the Obama administration’s policy and said that “the military is furiously working to prevent civilian casualties.” 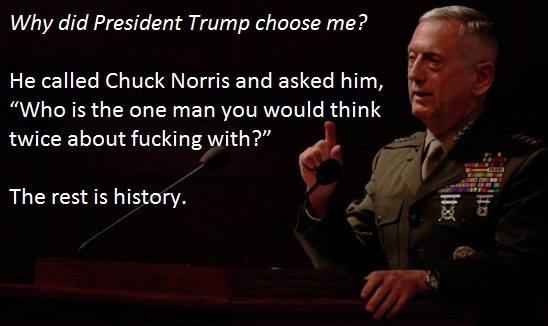 America’s former Cupcake in Chief. Furiously did nothing to combat terror. What next; a restriction on jet fuel?

This is why Obama’s policies failed and his legacy was rejected by America voters in November. Obama didn’t act like a superpower towards ISIS. Instead, he allowed our enemies to dictate the rules of engagement to the US.

Obama’s naïve approach to warfare, along with his failure to listen to the advice of military generals, has allowed the strengthening of ISIS in the Middle East.  This is not leadership, but political correctness. And it puts American lives at risk.

Thank God, President Trump and General Mattis are taking the fight to the enemy. Effective leadership, especially in warfare, cannot occur when you are more worried about optics than in getting the job done.

Strong leaders are decisive and send a clear message to enemy combatants. General “Mad Dog” Mattis and the Trump administration have sent that message to ISIS. And that message will continue until the mission is accomplished.