MSNBC hack Joy Reid should have just grabbed Michael Moore by his “female genitalia,” after the fluff interview she did. Get a room!

After fawning over the “butt-her-face” loser, Reid asks Moore if he talked to any female Trump voters at the rally?

Memo to Reid: female Trump supporters who would have attended that rally would have been BEATEN!

Moore: I (ahem) I did not…The day before I did, I went to the inaugural parade, uh and was there on the route with a few Trump supporters. It was quite empty, the stands I’m sure. Katie Cure posted a great video, a tracking shot of the parade route and the empty stands.

Michael Moore lied through his teeth.

You know he’s lying, because he gave detail about the parade route. Detail is a tell-tale sign of lying, as Resource Manager explains:

Liars are extremely generous when it comes to giving you details. They’re trying to con you into believing them by overloading you with details.

This shows they’ve put a lot of thought into what they’re going to say and probably even rehearsed it in their head.

Honest people give more succinct answers, because they’re telling the truth and they don’t have to think about it.

“But I did run into a Trump voter, and I asked them…uh and especially I remember one woman, I said, she was telling me she voted for Trump, and I said, ‘Really, despite his attitude towards women and the things that he said.'”

“And um she said, Well, you know, women a lot of us just had to learn to take it over the years. That’s how my dad talked, and that’s how my brothers talk.” 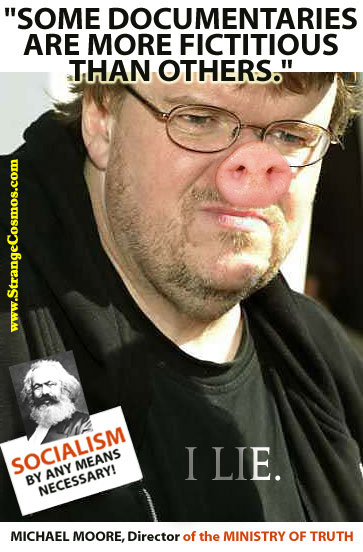 The next proof that Moore lied, is he discusses running into “them.” Then suddenly he mentions one woman specifically. So which was it, a “them” or a “her.”

I will bet you your next mortgage payment that nobody remembers Moore at this event. Nevertheless let’s play along. Let’s pretend we believe that Moore actually went among a group of Trump supporters to ask them why they voted for Trump. Because we would all be in the mood to speak with him about one of the most amazing elections and events in our lives.

But for the sake of this exercise, let’s say that Moore did indeed engage a woman in this conversation. You then must now suspend belief, if you think Moore would challenge her, as he says he did.

And I’m sure she was duly impressed about HIS attitude towards Trump.

“I said ‘Really, despite his attitude towards women and the things that he said.'”

Next, you would have to believe that a woman who would obviously know who Moore was, would then put her family on blast, by telling Moore that she was used to women being treated like shit. After all MY DAD AND MY BROTHER DID IT!

“And um she said, Well, you know, women, a lot of us just had to learn to take it over the years. That’s how my dad talked, and that’s how my brothers talk.”

And that’s how LIARS talk, when they promote FAKE narratives for profit on TV.

Again, Moore offers too much extraneous information. And I’d bet my balls for bubblegum that this woman doesn’t even exist, and this scenario never occurred.

Only a brain-dead Leftist moron would believe this story, which brings me back to Joy Reid.

Well, “Uh!” to Joy Reid for allowing Michael Moore to lie through his vagina-head-wearing teeth.