If you’re buying this “smooth transition of power” Obama promised, let me tell you about my ocean-front property in Arizona. It’s for sale. Cash only. 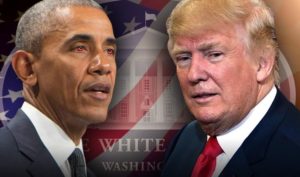 It’s customary for the lame duck to sit around and do nothing. To shop for houses or plan a vacation, but not Obama. This guy has unleashed his plot against Americans in his final days as President. Shockingly half the country is too blind to face the facts because they’re too busy boycotting an inauguration.

Trump is stepping into the biggest White House disaster in history, and cleaning up the debris will be a mammoth undertaking. Hurricane Katrina made less of a mess. It’s like Obama went around setting booby traps for Trump to fall into. However, Trump won’t fall alone. He’s the leader of this great nation, which proves Obama never cared in the first place.

Guantanamo Bay. There were 684 inmates there in 2003. We’re talking bad dudes. Al Qaeda linked terrorists, Taliban leaders, Osama Bin Laden’s own body guard!! Bit by bit Obama has set them free and many of them have returned to terrorism with a bang. Here we are, the end of Obama’s presidency and there are 31 inmates left! 31! Obama promised to close GITMO down. What kind of America-loving, legacy-leaving President would unleash a train of terror? But rest assured, Trump has vowed to keep the doors of GITMO open and fill her back up.

Obama(don’t)Care. Everything about this piece of legislation is built upon lies. Keep your doctor- lie. No spending cap on services received- lie. AFFORDABLE COVERAGE: LIE! Families aren’t saving $2,500 a year. They’re paying out in excess of $6,500 a year. Of the 23 original Co-ops, only 7 remain standing. Doctors are pulling out. Big companies are pulling out. Americans want to pull out but they’re scared of the tax penalties. The list of nightmares is almost as long as the wording of the legislation.

Israel. Obama knew our good relationship with Israel was the only thing keeping the Middle East from blowing up into oblivion. Democrats and Republicans agreed, abandoning Israel would be a mistake. So what did Obama do? This pompous ass ignores both sides of Congress, leaving Israel in the dust. The US never votes against Israel, but once Obama realized Hillary wasn’t gonna take over his office, he decided to act like a two year old and play games. Unfortunately his temper tantrum reversed decades of foreign policy, endangered millions of lives, and created a conundrum for Trump.

Iran Nuclear Deal. Long before Trump was elected Obama was cooking this one. It was a treaty, but Congress wouldn’t approve it, so Obama said it wasn’t a treaty. It was just a deal. A bad under the table kind of deal. Iran got everything they asked for and we got …. hmmmm… let me think a moment…. oh yes, Obama the Great Negotiator got us NOTHING! Not even a pizza coupon. Trump would’ve at least charged them for delivery.

Midnight Regulations. Obama has issued more Midnight Regulations that any president in history. This lame duck issued 145 regulations at a whopping cost of $21 Billion! Do you know why they’re called midnight regulations? Of course, they’re issued when no one’s looking! It’s like when your teenager crawls out the window and drives your car to the party across town. You wake up and run out of gas on the way to work because you had NO IDEA somebody drained your resources. This fool is on his way out the door and spends $21 Billion of OUR MONEY! And he will try to spin it to say Trump is to blame.

These booby traps will certainly make the presidency challenging for Trump, but I have a feeling the millionaire developer enjoys problem solving. That’s how he built an empire from nothing. My prediction: Trump will bypass Obama’s booby traps and do exactly what he promised- make America great again!