In typical Obama fashion, he lectured privileged white folk. He claimed that white’s healthcare is cheaper, that whites have unrealized privilege. For whites, life is Utopia.

The line that got the most applause, however, happened when America’s first black president reminded white people that we still have a lot of making up to do for Jim Crow and slavery.

“Sure, we’ll get right on that,” I mocked at Obama on my TV.

The irony of watching Obama hearken white people back to slavery and the lack of civil rights for blacks, as he wholly ignores the black genocide occurring in the very city where he spoke.

Ironically, here is the report of Chicago shootings that happened on the day of Obama’s arrival in Chicago.

A 16-year-old boy was shot and wounded in Chicago’s Morgan Park neighborhood, one of at least six people wounded in city shootings from Tuesday afternoon to early Wednesday, police said.

Then as Fox News reports on the Chicago violence, black men are overwhelmingly impacted: 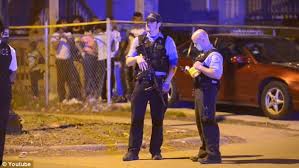 In recent months, the president has been mostly quiet about an aggressive solution to Chicago’s violent crime epidemic. The city saw more murders in 2016 than New York and Los Angeles combined, yet is considerably smaller in population than either city. Chicagoans wonder if the president will address the city’s crime – the “elephant in the room” – during his speech Tuesday night.

Obama said race relations are better and African-Americans are better off because of his presidency. Perhaps, if blacks killing other blacks is the measuring stick?

And what of the Facebook livestream of the black teens torturing a white man?

Next, Obama will claim that he reduced the number of blacks on welfare as 762 were killed in Chicago. Is there an award for that?

Maybe Obama should be lecturing his former chief-of-staff, Chicago Mayor Rahm Emmanuel. He’s a Jim Crow Democrat who has overseen the death of thousands of his black citizens.

Too bad Obama didn’t lecture from high atop the dead black bodies he’s ignored for 8 years. That would have been a proper send off.