Only bonehead Leftists would believe Obama was worth more than $10 in Zimbabwe money. The rest of America know Obama was the worst president ever, bar none.

For those who would call me a racist {ouch, that hurt…NOT!}, I present the Obama legacy.

On the last point, one of my friends quipped: “What does Obama care; these criminals won’t be living in his neighborhood.“

But Obama has other records, and we haven’t heard much about this one. According to The Washington Free Beacon,

President Barack Obama had the worst record before the Supreme Court in modern history, losing half of the cases argued before the high court in his two terms, according to a new study.

While liberals point to legalizing same-sex marriage and the upholding of Obamacare subsidies as cementing the former president’s legacy, the study reveals Obama had a much weaker record with the Supreme Court than previous  presidents.

The academic study written by Washington University professor Lee Epstein and University of Chicago law professor Eric Posner found Obama had the “worst record of any President” since Franklin D. Roosevelt. In fact, his presidential performance before the Supreme Court “may be the worst since the Zachary Taylor administration” in the 19th century.

And this comes with stacking the deck with two of his own.

Imagine Obama’s record if we had placed two competent jurists, instead of Kagan and Sotomayor?!

Although this chart doesn’t go back as far as the Zachary Taylor administration in the 1850s, one can see the dramatic lack of winning compared to Presidents from Roosevelt in 1932 to the present day. 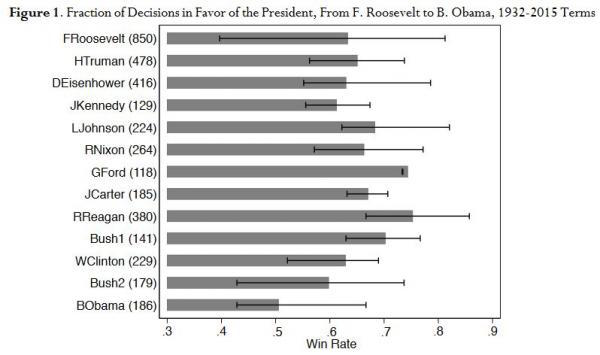 So with two justices on his side, Obama’s record yet again showcases failure. Had it not been for Justice “Turncoat” Roberts, things would have gone from horrible to horrendous for the goofy “constitutional scholar.”

Can we say “Black Robes Matter?”

More from The Washington Free Beacon:

Noteworthy losses during Obama’s presidency included the blocking of an executive action giving work permits to 5 million illegal immigrants, “effectively ending what Mr. Obama had hoped would become one of his central legacies.”

The Court also handed a “humiliating” loss to Obama in his attempt to make recess appointments to the National Labor Relations Board while the Senate was in session.
“Indeed the case was so clear-cut one can only conclude that the president didn’t care what the Constitution said,” the Washington Post’s Jennifer Rubin observed at the time.

Experts have argued that executive overreach by President Obama led to more losses in the High Court.

In the 2016 term, the Obama administration argued 10 cases that resulted in unanimous decisions against the government, meaning the president did not receive a vote from his own justices he appointed to the Court, Sonia Sotomayor and Elena Kagan.

“[T]he reason this president has done so poorly at the high court is because he sees no limits on federal—especially prosecutorial—power and accords himself the ability to enact his own legislative agenda when Congress refuses to do so,” wrote Ilya Shapiro, a senior fellow in Constitutional Studies at the Cato Institute.

Obama has an appetite for a loose Leftist interpretation of the Constitution he disdains. That, coupled with his penchant to bludgeon US citizenry over our collective heads with his agenda, connects the dots to his stupendous “loss” rate.

Obama’s legacy can be summed up tidily in three words: President Donald Trump.