The costs of ObamaCare and the hoopla surrounding it reminds me of Christmas browsing with my kids last year. 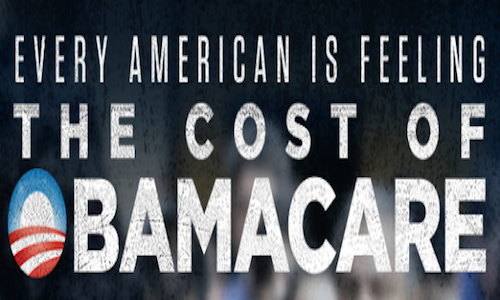 We sauntered through a little antique store that contained beautifully decorated Christmas trees. A snobby woman behind the counter spotted my children, then shouted at me, “You break, you buy.”

At the time, I had I picked up an ornament from the tree. I noticed a crack already across the little snowmen, so I promptly put the ornament back on the branch. I muttered “Junk!” under my breath, and walked away.

A few minutes later, the mean-spirited woman got in my face and said, “You broke it. Your kids broke it. You have to buy it.”

I was noticeably irritated; because neither I nor my children broke it. That substandard crap was already cracked. Nevertheless I gave her the $3 just to shut her up.

Such is ObamaCare; substandard crap. Further, ObamaCare was broken out of the box, and now we must buy it.

Taxpayers have already lost out on more than $1.7 billion in funds they will never recover. Premiums rose, as did deductibles, yet “regressives” still sell ObamaCare like snake oil.

And so another one bites the dust.

The Illinois ObamaCare co-op closed its doors, making it the 16th to do so. Thus more taxpayers find themselves looking for new insurance homes. With only 23 original co-ops funded through government loans, only 7 remain.

Obama’s record: 7-16. If he were a coach, they would have fired him mid-season.

And you can bet they would have burned the playbook.

Like the lady in the store, Leftist say to Trump, “You break, you buy!”

Unlike me however, Trump won’t buy it. He will likely ask to look at all the inventory. When he sees that they are all broken, he will negotiate to buy them cheap, repair them, then sell them for 3X the original price.

Why can we trust Trump to fix it?

This is good news to families like mine. We recently were faced to make an ObamaCare insurance decision, however the only affordable plans we found had outrageous deductibles we’d never meet. For us, the coverage was useless. That was likely the intent.

For me, it was cheaper to just take the penalty. I am not alone.

When Angela Denig couldn’t cover the costs of Obamacare health insurance this year, she made the only decision she could: She gave up on coverage, paid the fee for not being insured and hoped she wouldn’t get sick.

A few months later, a health scare would put the South Florida woman’s high-stakes gamble to the test. But at the time, she said, the calculation was clear. Paying a “several hundred dollar” penalty for remaining uninsured was much cheaper than forking over a monthly insurance premium of at least $200 under the Affordable Care Act — the only insurance she qualifies for.

Thankfully, we won’t have this nonsense much longer. Now we need to make sure the Supreme Court rules on this mandate again, this time protecting the citizens.
Facebook Twitter
Tiffany LayneJanuary 9, 2017
2 minutes read
Don’t Miss Out!