News continues to pour in about the passing of Orlando Sergeant Debra Clayton, gunned down outside a Wal-Mart.

She was shot three times while investigating the report of a fugitive in the store.

The suspect, Markeith Lloyd allegedly killed his pregnant girlfriend only days before.

Leftists should note that Lloyd, a black man killed two women, and one child. Moreover, one of the women was certainly black, while I’m willing to bet Lloyd’s girlfriend was as well. Almost certainly the child was black, presuming the child was Lloyd’s. Let’s all say it together, “Black Lives Matter.”

For the Left, there are at least a couple of “blame Trump” narratives that come to mind.

In one, Lloyd represents the typical woman-hating Trump voter. A misogynist.

He heard voices and Trump told him to kill those women, and he acted on his inner “Trump” demon.

Or try this one.

Upset that anti-black Trump was elected president, Lloyd lashed out. Unfortunately his girlfriend was collateral damage of “Trump rage.”

In shooting officer Clayton, the left will rationalize that Lloyd was justified. Officer Clayton abandoned her “blackness” when she put on the blue uniform. Clayton became a black oppressor, and thus a Trump supporter. For the Left, Clayton’s death represents “righteous kill.”

Oh, then there was that “burden” that, not who, was killed. The unborn baby. What did he or she to deserve to die at the hands of its father? Nothing, except to be born in the womb of a woman who picked a bad man. You can bet that was a cycle repeated.

After shooting Sergeant Clayton, Lloyd took off, car-jacked another vehicle,and managed to escape police again. As of this writing, Clayton remains on the run. 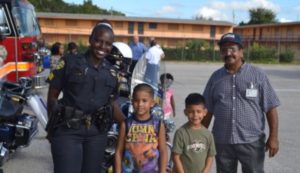 “THIS is how we know and remember Sergeant Debra Clayton. She always had a smile for kids and always took a moment to interact w/community.”

Immediately the White House responded with… Oh, wait… they didn’t.

The scenario of losing a parent in the black community is far too prevalent. I can certainly relate, as I raise 4 mixed-race children from my sister and the absentee black father who created them.

You can bet there are Leftists who look for reasons to excuse Lloyd.

One of America’s protectors lost her life doing what she loved. She died doing her duty.

While many Hillary Clinton-supporting Leftists anguish over Clinton’s loss, Sergeant Clayton worked a man’s job in a man’s world. She represented women well. She gave her life for the cause.

Hillary Clinton doesn’t care and neither do most of her supporters. Obama will not recognize her and the many other police officers who lost their lives serving others. As most of America realizes, Obama is the reason these shootings occur.

The number of police officers killed by gunfire on duty has doubled this year, even as President Barack Obama hinted racism on the part of state and local police officers may contribute to the deaths of African-American civilians during stressful confrontations.

Thankfully the time of hunting the police approaches its end. Police will be much safer once Obama has left the White House.

There should be absolutely no tolerance for this violence against officers. Hopefully President Trump will insure the safety of police.