I want you to imagine what would have happened to this white witch had she tweeted “F*ck Barack Obama?”

Not to go all ‘Don Imus’ on you, but the black hammer of Thor would have dropped on that nappy headed ho.

The Left tolerated no insubordination when it came to baby black Jesus, aka Barack Obama. So what he was unqualified, wholly incompetent, and walked around with obvious false bravado. He was the Left’s magic Negro, and thus off limits.

President Trump is a wealthy white Republican, ergo completely fair game. You can even discuss “blowing up the White House” with him in it of course, with barely a squeak.

I wrote of this at the time,

Apparently Madonna took things just a bit too far, that will get her an investigation by the Secret Service. It seems that Madonna may be losing it, so much so she actually commented that she has “thought an awful lot about blowing up the White House.”

If you get the right Secret Service agent, she might even help. We recently profiled this Kerry O’Grady.

Yet, we learned that a senior secret service agent, Kerry O’Grady has publicly announced that she will not protect President Trump.

A senior U.S. Secret Service agent posted Facebook condemnations of President Trump during the past seven months, including one in which she said she wouldn’t want to “take a bullet” for him.

O’Grady went on to explain her disdain for Donald Trump, going as far as calling his presidency a “disaster” for the country, and wait for it…especially for women and minorities.

So when Turtle Boy found this story about an Assistant Attorney General in Boston, Claire Masinton who tweets #F*ckDonaldTrump, I wasn’t surprised.

I literally had no idea that there was an “Assistant Attorney General.” But yea, this is a direct violation of Massachusetts State Employee Ethics Laws, because you’re not allowed to post your job title while espousing political statements like this. You can talk about things you’re doing for the Attorney General’s Office, but you can’t post memes about killing the President while using the hashtag, “#FuckDonaldTrump. 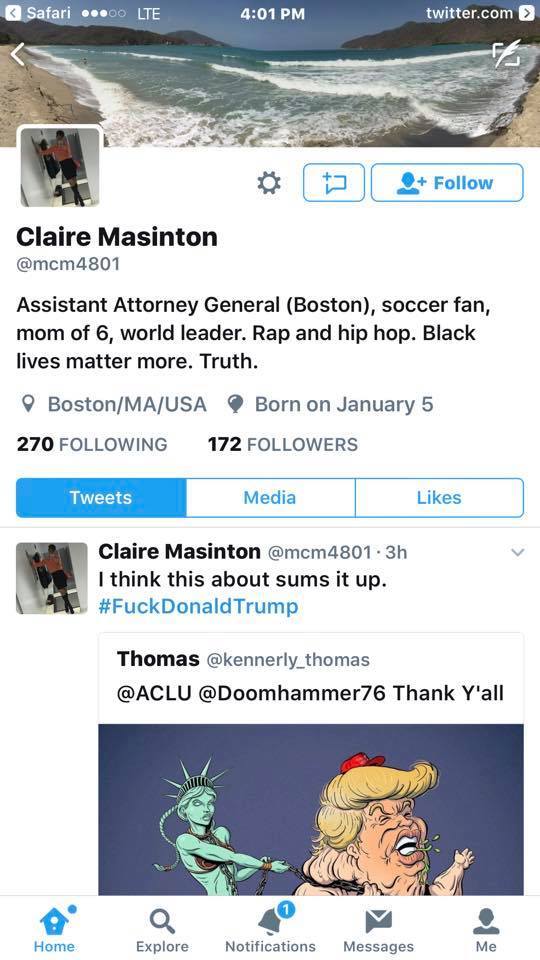 Her views are not about “f*ck Donald Trump,” but are in fact about f*ck everybody who voted for him or now stands with him.

This is NOT about Trump, but about a Leftist attacking Conservatism. I suggest we come together to get this woman removed. The Tea Party Community will begin working this.