CNN thought they had a full dance card. However, they were just dis-invited to the ball. A few of their friends were also kicked to the curb, including The New York Times, Los Angeles Times, Buzzfeed and Politico.

At least that’s how it went down at Friday’s daily White House press briefing. I’m sure the Crybaby News Network, also known as the Clinton News Network, is still baffled by Trump’s move. On a chessboard this move is called Checkmate. 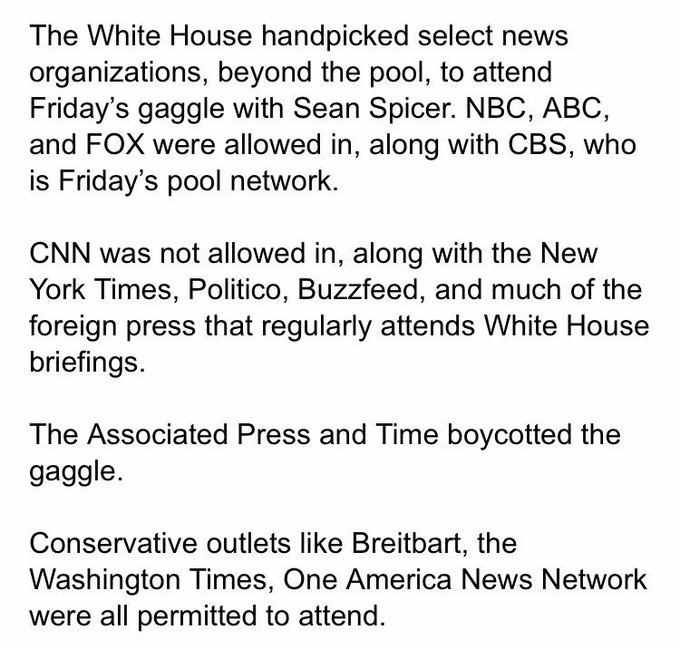 Recently Donald Trump took back his statement that CNN is the Fake News. He replaced it with “they’re the VERY Fake News”. These guys can’t accept Hillary’s defeat and perpetuate lies to soothe their own heartaches.

Their house of cards if falling, and it’s falling fast. We previously reported on James O’Keefe and his efforts to expose the Very Fake News. In fact he’s offering $10,000 to the individuals who can provide the proof. Liberals do not possess loyalty, so that money is like bone dangling in front of a starving pack of dogs. It won’t be long before the turn on each other and chase the cash. The the Very Fake News will have no where left to hide. Truth will be exposed.

Meanwhile, Trump will no longer give the liars front row seats. If they want to twist the stories, they’ll have to wait until they are old news already put out by conservatives.

Trump makes it clear. He’s not protecting himself. It’s the American people who are being fed a steady stream of bulls&*t.  It’s one thing to have opposing views. However, it’s quite another to manufacture fake stories. As we already learned, that’s exactly what CNN does.  Richard Griffiths, Vice President and Senior Editorial Director of CNN is already exposed teaching young journalists to twist stories. His advice? “Aid the afflicted, and afflict the comfortable!”

Trump wrote on Twitter, “the FAKE NEWS media (failing @nytimes, @NBCNews, @ABC, @CBS, @CNN) is not my enemy, it is the enemy of the American People!” ahead of his comments at the Conservative Political Action Conference.

Until they’re ready to tell the truth, CNN and the other Leftist media are banned from the White House.