In his first speech as Secretary of State, Rex Tillerson charmed State Department employees with his down-to-earth personality. He put forth a real commitment to honesty and change.

Apologizing for his tardiness, Tillerson joked that the prayer meeting went longer than expected because people feel an extra need to pray this year. He was able to acknowledge existing tension while making a call to come together as a team.

Finally, we have a guy stepping up to say ‘no matter what you were feeling pre-election, it’s time for unity.’

“I know this was a hotly contested election and we do not all feel the same way about the outcome. Each of us is entitled to the expression of our political beliefs but we cannot let our personal convictions overwhelm our ability to work as one team.” He went on to say: “No one will tolerate disrespect of anyone.’’

Tillerson, a former Exxon-Mobile CEO, has more than 40 years experience in the business world.  Here’s a guy who was ready to retire and kick it back at the ranch, but instead he’s answering the call of public service. In his opening speech to the State Department, he praised workers at every level for doing their jobs “regardless of who was in charge.”  Despite his corporate prowess, he showed true humility when he vowed to lean on the expertise of his new teammates.

Our founding fathers wanted a government by the people. Business leaders, farmers, inventors, scientists, and community activists- they are supposed to take turns serving as officials. ‘Career politicians’ was not the plan. Remember Hillary Clinton (thankfully, just barely) spent 45 years in public service and didn’t manage to change a damn thing.

It’s time we get back to the basics and rely on our most talented individuals to tackle the tasks of balancing the budget, stimulating the economy, and protecting national security. We can’t let people spend a lifetime on Capitol Hill doing nothing but cash in our dollars.

Pre-Obama, the U.S. took its position as a Superpower seriously. But you know what happened; Obama happened.

Our Superpower status was all but flushed down the toilet. Now, Trump is ready to restore us as a front runner. Tillerson believes it is the right direction for our country.

Tillerson acknowledged that he would become the nation’s chief diplomat at a “pivotal time” and listed a number of “considerable threats” that the U.S. faces, including Russia. He said, “We aren’t likely to ever be friends…our value systems are starkly different. China has emerged as an economic power in global trade, and our interactions have been both friendly and adversarial. While Russia seeks respect and relevance on the global stage, its recent activities have disregarded American interests,” he said. “Radical Islam is not a new ideology, but it is hateful, deadly, and an illegitimate expression of the Islamic faith. Adversaries like Iran and North Korea pose grave threats to the world because of their refusal to conform to international norms.”

Here’s just one more thing the left says Trump can’t do. They shouted “the CEO of EXXON cannot be the head of the State Department.” Then they got “Trumped.”

What we witness is a huge change from anything we’ve seen in Washington D.C. Honestly, the exchange of presidents has rarely brought such massive transformation in the status quo, much less change for the better. Trump is shaking things up with his appointments, drawing on a large pool of talent from the private sector.

“Change for the sake of the sake of change can be counterproductive and that will never be my approach. But we cannot sustain ineffective traditions over optimal outcomes,” Tillerson said.

It’s about time we bring in people who are willing to do things differently. I paraphrase Ronald Reagan when he quipped of working with a 1980s government: 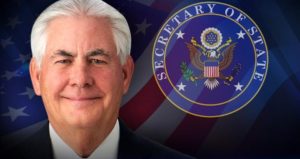 “The worst thing a citizen of America could hear was, “I’m with the government, and I’m here to help.”

Under previous presidents and particularly Obama, no truer words could have been spoken. But now we arrive at a different time. We have new words, and these are the five words that will change everything in Washington, D.C.