It’s funny how this stuff never happens to those who can protect themselves.

We chronicled how MMA fighter Jake Shields took on 20 Leftist terrorists at Berkeley, who were attacking a Trump supporter. Jake came out unscathed.

I get massive amounts of threats from the Left, as they plot my demise. Something tells me that my being a trained fighter and an excellent marksman may be a deterrent. Oh, and there is my attitude towards them that is a cross between a Tasmanian Devil and a pissed off rattlesnake.

But the Left will pick on the weak, unfortunately.

In a time when the LGBT community claims to fight for their rights, they are selective in their outrage. At Berkeley, a gay Trump supporter Milo Yanniopoulos was forced to cancel his event, due to riots. And now we get this story out of Texas.

According to The Gateway Pundit, Scott Sauter was beaten by a black thug for merely lighting a cigarette with a Trump lighter:

Scott was beaten unconscious because he is a Trump supporter.

He spoke with us tonight:

The Gateway Pundit: We’ve seen the pictures, what happened:

Scott Sauter: I lit up a cigarette and pulled out my lighter which has a picture of Donald Trump on it, a man approached me after noticing the lighter. He said ‘You’re in Austin. You are actually pulling a Donald Trump Lighter?! You don’t think that’s a big deal?’ I told him that I support our president. That’s when things got crazy. He became verbally aggressive. He started swearing, telling me that Austin is mostly Hispanic. It escalated from there, he stole my lighter and then he started beating the living sh*t out of me.

TGP: You didn’t throw the first punch or anything? This man attacked you just for supporting the President?

Scott: I wasn’t being aggressive at all. He grabbed my lighter, took it from me and then he started berating me. I told him that I support our president and I believe in his policies. That’s when he started hitting me.

Now here is where Leftism spirals in on itself, as the LGBT community considers itself “down with the black cause.”

Scott: It was an African American man… the police came when I was on the ground knocked unconscious. My head was busted open. I couldn’t find my glasses. I could barely speak because my mouth was so swollen. I had to just get back to my apartment… That’s what you get for being a gay conservative.

TGP: That’s a nightmare. Have you heard any more about the police investigation?

Scott: So far it’s all pending. They aren’t sure if it’s a hate crime.

TGP: I’d go so far as to say that its a double hate crime. Not only are you gay – which I know is liberal identity politics – but more importantly you’re conservative. And right now hate crimes against conservatives are on the rise. Did he take anything from you?

Scott: Just my trump lighter, and my glasses. He didn’t mug me if that’s what you’re asking.

The viciousness of these anarchists and other terrorists has no bounds. 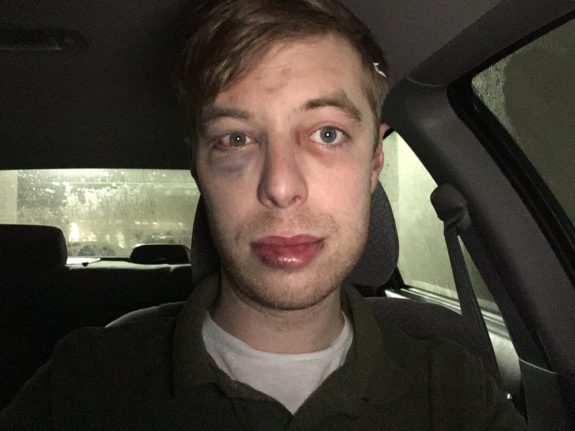 Under Obama, Conservatives practically lived under the “purge,” as we were attacked relentlessly. What America experiences now are the effects of Obama’s lawless leftovers.

As much as Obama was universally despised by many Conservative Americans, you saw none of this nonsense.

One of these days, these thugs will run into the wrong people. You can mark my words when I tell you that soon, wearing Trump gear will be more than acceptable.

And as for Scott in Texas, I suggest he take advantage of the “carry” laws and get a firearm. Then dress in Trump gear from head to toe.

I guarantee you that Leftist thugs of all colors will get the message.