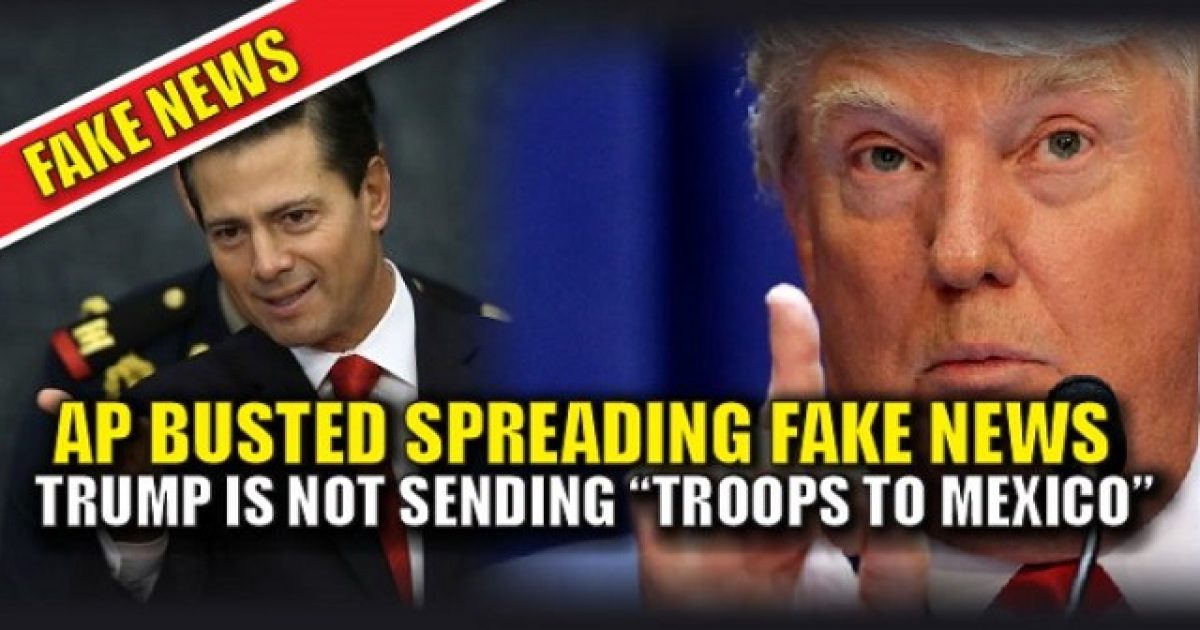 We published this article earlier, only to find out that it was fake news. The reason we published it had much to do with the AP link that accompanied it.

In a time Facebook puts a warning on Conservative sites, calling us “fake news,” the AP development proves what we already know about the Left. They will do anything to silence us, while wholly ignoring themselves.

Don’t think Facebook will put a VIRUS warning on the AP site as they have mine. These fascists have hindered my site traffic for over 4 years, while letting disgusting Leftist filth permeate.

And they wonder why President Trump gave them the title “fake news,” and continues to drive that point home?

As RT reported on the AP fake news validation,

Just a day after Trump lambasted the mainstream media’s “fake news,” AP has been criticized for its “irresponsible” reports that the White House is considering mobilizing up to 100,000 National Guard troops to round up illegal immigrants.

White House press secretary Sean Spicer described the report as “not true” and “100% false” and “irresponsible,” but it wasn’t only Trump’s staff that have been left angered by the report with many on social media echoing Spicer.

Let’s analyze the outcome of the fake news about the National Guard.

First, most low-information voters won’t bother to learn the truth. Thus, they will believe the fake news narrative.

Next, do you think that AP will do a mea culpa? Will they admit to the damage has been done? They may not have to.

During a press conference on Thursday, Trump once again took aim at the MSM and “false, horrible and fake” news reporting. While AP wasn’t singled out then, it has now found itself at the center of such accusations.

Although a copy of the draft memo was shared online, social media users have been using both #fakenews and #MediaLiesAgain to deny the reports.

In the press conference, Trump riled up the media, particularly CNN. Jake Tapper practically had a meltdown. But did Team Trump plant the story for another reason?

Speculation was rife that the leaking of the memo was, in fact, intentional, and was aimed at rooting out potential insiders in the administration. Questions were also asked as to why the White House didn’t deny the reports when asked by AP.

We will find out more on this later. As for calling out the National Guard, it wouldn’t be the first time. As McClatchy shows, this was done by Obama:

In 2010, former President Barack Obama said he would deploy 1,200 National Guard troops to the U.S.-Mexico border. They were sent to Arizona, Texas, California and New Mexico. While National Guard troops were not authorized to arrest people found to be crossing the border illegally, they helped staff observation posts, monitor surveillance footage and build fences.

Anybody think the media will explain what Obama did, or will they propagate the narrative that Trump is anti-immigrant?

Kevin Jackson - October 24, 2021
Alec Baldwin killed somebody on the set of Rust. Wait. Let me put this another way. An anti-gun, anti-American Leftist killed an innocent bystander and...