But Adam Hayat left pipe bombs in his hotel room. So, we have a clue, if you know where to look.

A manhunt that started last night in Denver ended in Los Angeles late this afternoon when police and FBI agents arrested a Pakistani-American for planting pipe bombs in his Denver hotel room.

Adam Hayat, 36, is wanted in Denver, Colorado for abandoning several explosive devices in the Sheraton Hotel there. As Fox5 Atlanta confirmed, he was found this afternoon at the LAX Holiday Inn and promptly arrested.

Police were initially drawn to investigate by reports of suspicious devices found at the Denver Sheraton. When investigators arrived on scene, they found several unexploded pipe bombs in the room registered to Hayat. Authorities have not revealed how many bombs they found.

9News reported that Hayat left a note at the Sheraton indicating his stash of explosives was in the room’s safe.  His note also provided investigators with the safe’s code.  When Authorities arrested Hayat the next day in Los Angeles, he was in possession of several knives.

By now under the previous administration, Obama would have given his standard press conference. He would have told non-Muslim Americans not to rush to judgment. That statement would have been followed by how peaceful Muslims are. Finally, Americans would have been chastised by Obama to be more tolerant when we discuss terror by Muslims. 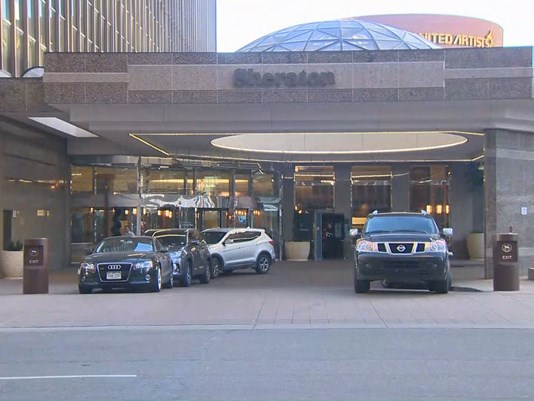 Adam Hayat is an American citizen who grew up in an upper-middle class neighborhood in St. Louis, Missouri. He enlisted in the U.S. Marine Corps and did some of his military service in Iraq.

Law enforcement officials revealed that Hayat may have flown to Los Angeles, following an ex-girlfriend.  But, it is unclear what connections, if any, Hayat has to Denver. He has no local arrest record, according to the Colorado Bureau of Investigation.

Nevertheless, the suspect will now face federal charges, possibly to include possession of unregistered explosive devices.

It remains unclear if this case has any link to terrorism. However, how many average everyday citizens leave pipe bombs in hotel rooms and carry a slew of knives in their luggage?